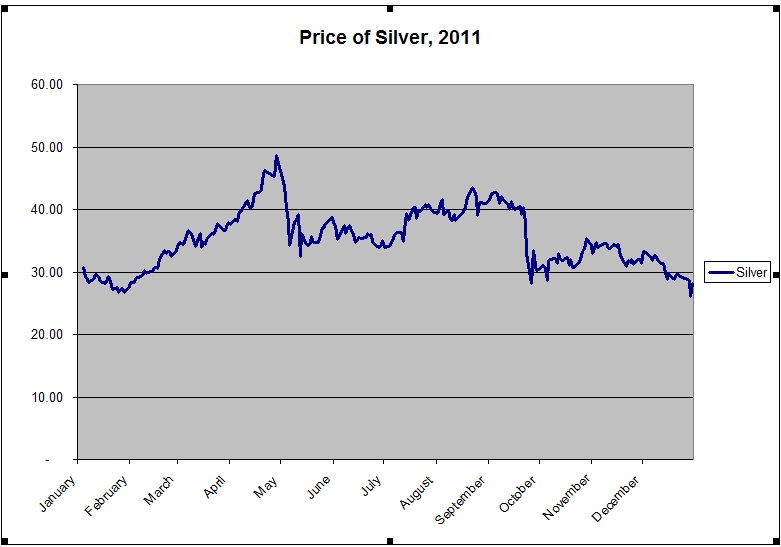 The first full week of December trading got off to a good start for stock players; not so good for precious metals investors. Stocks were up across the board, with the broad-market S&P 500 leading the charge with 1% gains. Gold lost 0.2% to $1,744 per ounce on the London Fix; silver suffered a 2% drop to $32.48. The following day, gold surrendered another 2.1%, while silver dropped 1.9%. Wednesday saw gold and silver bounce back a bit, with gold up 1.6% and silver up 1.9%, closing at $1,735 and $32.45, respectively. Stocks, meanwhile, were portending a crash, with the Dow posting small gains as the Nasdaq posted losses.

Savvy stock traders could have seen what was coming on Thursday, which was big losses across the board: the S&P 500 lost 2.1%, the Dow 1.6%, and the Nasdaq 2%. This was on the European Central Bank’s decision to rule out a big bond buy to help save some of the struggling economies of the Union. Gold actually suffered a 1.2% loss to $1,715, while silver posted a 0.6% gain to $32.64. The dollar was the big winner, of course, improving 0.62% to 0.75 euros. Friday saw stocks bounce back, while safer plays like precious metals and cash suffered losses. Gold finished at $1,709; silver at $32 even; and the dollar at 0.748 euros.

Gold and silver’s woes continued into the following week, with gold falling 2.9% on Monday. Silver lost 2.4% to close at $31.22. Stocks were also down across the board, and in a big way, with all three major U.S. indices losing at least 1.3%. The dollar, by contrast, was strong, gaining 1.4% to 0.758 euros. One could argue that this was more due to lack of faith in the faltering euro than optimism in the dollar, though. In political news, Newt Gingrich emerged as the Republican frontrunner – it seems so long ago now, doesn’t it? Also, Intel warned of soft sales, which could be a bullish indicator for gold and silver into 2012.

Stocks continued to lose ground on Tuesday, as the dollar continued to firm, gaining another 1.21% to 0.768 euros. Gold and silver, however, bucked the trend, and they posted modest gains: gold rose 0.8% to $1,672.50, while silver gained 0.4% to $31.34. Best Buy and other retailers posted disappointing sales numbers, which, again, is the type of news that could lead to bullish conditions for precious metals. But, turning wisdom on its head, gold and silver were absolutely hammered on Wednesday, losing 4.2% and 4.5%, respectively, while stocks continued to slide by more than 1% across the board, and the dollar gained another third-of-a-percent to 0.77 euros.

Gold and silver continued their swoon on Thursday, falling 1.8% and 3.7%, respectively. A bounce-back on Friday, with gold posting a 1.3% gain and silver a 3.4% gain, wasn’t enough. The two precious metals closed the week at $1,594 and $29.78, respectively; gold was down 6.7% and silver 6.9% for the week. Stocks were down, too, but not as bad: the S&P 500 lost 2.8%, the Dow 2.6%, and the Nasdaq 3.5% for the week. The dollar, by contrast, gained 2.57% against the euro, some of which was obviously actual strength. After all, when dollars become more valuable, it only stands to reason that dollar-denominated assets – including both stocks and precious metals priced in dollars – will see their prices, in dollars, go down.

While the U.S. stock market was closed on Monday, December 26, in observance of Christmas day, the forex was not. The dollar fell 0.16%. On Tuesday, the stock market opened up, but the London Fix was still closed. There were just three more days in 2011 trading by the time it opened up again, and they were some doozies: gold posted consecutive losses of 2.3% and 2.5%, before bouncing back with a 2.9% gain to close out the year. Silver was even more volatile: it posted a 2% loss on Wednesday, and an excruciating 8.7% loss on Thursday, but then bounced back with a 7.7% gain to close the year at $28.18 per ounce.

Silver, the greatest investment opportunity available today, was among the worst-performing of 2011. This shows why a mix of gold and silver may be wisest for investors, but nevertheless, silver’s underperformance makes it all the more attractive for 2012. 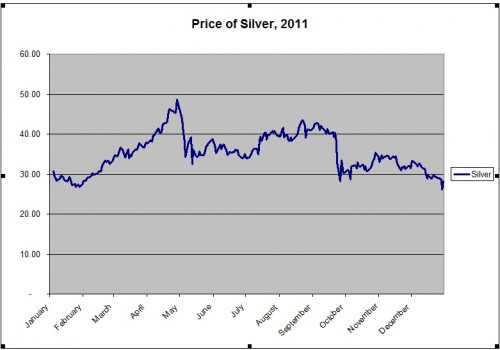