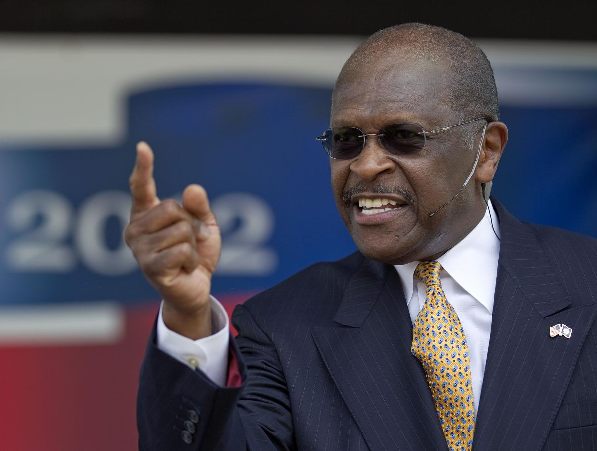 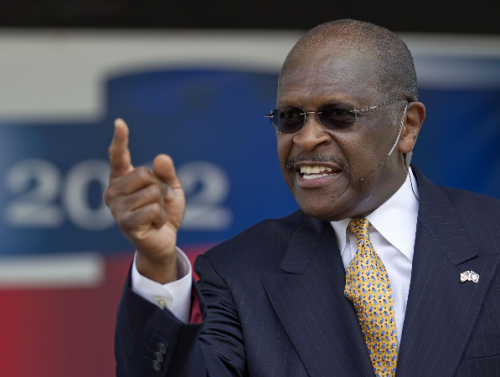 Herman Cain has vaulted into the lead of the race for the Republican nomination for president, polls say. Cain has become a media favorite based on three credentials:

Cain is touted as an outsider since he is a businessman; the former head of Godfather’s Pizza. Yes, Cain has demonstrated business acumen in his career, but he’s hardly an outsider. In fact, an argument could be made that Cain is more of an insider than any other contender in the race – even party stalwarts like Mitt Romney and Newt Gingrich. This is because Cain is a former Federal Reserve governor; an insider among insiders. Can anyone really expect him to bring about meaningful reforms?

Secondly, there is the fact that Cain is an African-American. This, of course, should not matter, but it clearly adds to his appeal. A race between Mr. Cain and President Obama would be an even greater media sensation than Obama’s initial election to the presidency.

Third, there is the “9-9-9” business: a typical political gimmick in that it is a scam masquerading as reform. What Cain is calling for is a massive reduction in the income tax paid by most American individuals and businesses, down to 9% (the first two 9’s); but the institution of a new, nationwide sales tax, also at 9% (the third 9). Would this really even be desirable?

Obviously, any income-tax cuts should be welcome. With top personal and business tax rates of 35%, the first two 9’s in the Cain plan certainly seem appealing. However, reading the fine print, Cain’s plan promises to tax “the broadest possible base.” So while the top rates right now may be 35%, plenty of income is exempt from taxation, and very little income is taxed at those top rates. Furthermore, income tax is fairly easy to avoid, especially for the self-employed.

The real economy killer of Cain’s plan is that third 9 – the national sales tax. While the first two 9’s would presumably do away with a lot of bureaucracy, this third 9 would require the creation of an entire new class of tax collectors. In fact, it would make federal tax collectors out of virtually every citizen – conscripting the population on a massive scale.

The 9% sales tax would apply to all transactions. So you’d pay an additional 9% on your purchases at Walmart, but also at your local mom-and-pop store. Not only that, services would also be assessed a 9% tax, so not only would your lawyer have to collect a 9% tax for the federal government, but so would the 15-year-old who mows your lawn. How about the kids selling lemonade on the side of the road? What about single moms selling hand-crafted goods on eBay? Yes, they’d have to collect the tax and send it to Herman Cain.

Based on the so-called “Fair Tax,” the third 9 in the 9-9-9 plan would presumably exempt used products from taxation. This means that used products would become that much more desirable, which would discourage manufacturing and building. Imagine paying a 9% sales tax on a $30,000 car or $250,000 home!

Herman Cain’s 9-9-9 plan is a gimmick, and not a meaningful reform. America does not have a tax-collection problem – it has a spending problem. And that spending is facilitated by Cain’s former employer, the Federal Reserve. Only one candidate for the Republican nomination truly understands the Federal Reserve, and he doesn’t want to reform it – he wants to abolish it. This, of course, is Ron Paul. But investors in silver and gold need not look to political saviors anyhow. Liberation is a personal exercise; something we can do for ourselves. We do not need to wait for politicians to make us free. And those among us waiting shouldn’t hold our breaths.