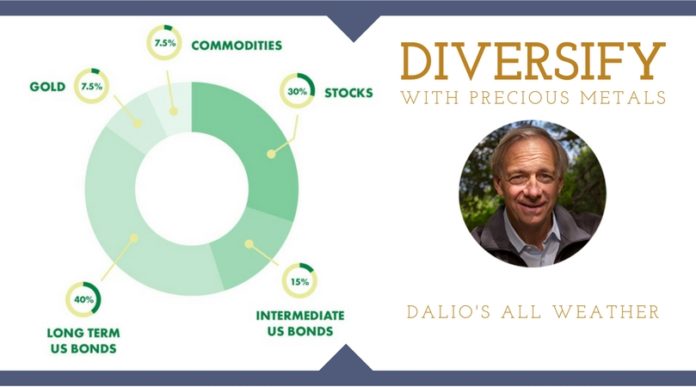 As the old Wall Street saying goes, “Put 10% in gold and hope it doesn’t work.” A recent study by Ibbotson Associates, commissioned by Bullion Management Services Inc., confirms that might not be such a bad idea. And, historically, that has worked just fine — even in the absence of economic calamity. On top of Ibbotson Associates, there’s a certain billionaire investor named Ray Dalio who’s created an All Weather Portfolio. It’s beaten market returns for decades.

The Theory of Diversification

Te idea behind asset allocation is asset classes are diverse. Historically, stocks and bonds tended to appreciate and depreciate in opposite directions. Therefore, a portfolio was sufficiently diverse if it held both stocks and bonds, with maybe a little cash on the side. Gold, so long as the dollar was still tied to it via the gold standard, and other precious metals were rarely given much consideration, since most world currencies were backed by hard assets.

But once President Nixon closed the gold window in 1971, an interesting thing began to happen: Stocks and bonds started trading relatively in tandem. For example, from 1926 to 1969, the correlation between stocks and bonds was -0.02; meaning that if stocks as a whole went up by 10%, you could expect bonds to go down by 0.2%, and vice versa.

But what of gold vs other precious metals? Using the SPMI (Spot Precious Metals Index), which consists of equal parts gold, silver, and platinum bullion, precious metals have had a -0.10 correlation with U.S. large-cap stocks in the years 1972 (the first year gold was detached from the U.S. dollar) through 2004, and a -0.18 correlation with long-term U.S. government bonds. Thus, precious metals proved to be a legitimate diversifying hedge.

Only 90-day Treasury bills (+0.63) and the SPMI (+0.43) moved in the same direction as inflation. But of course, the rate of return on 90-day T-bills was not as high as gold, silver, and bullion over the thirty-two-year period, making the SPMI the superior investment. 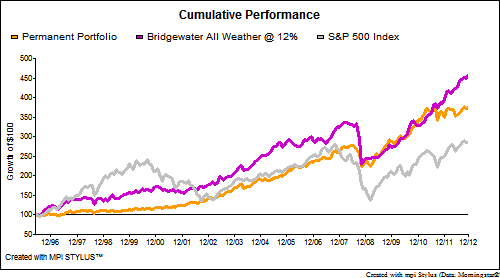 In a piece Robbins wrote for Yahoo Finance he discusses an all-weather strategy he developed for the book with the help of Bridgewater’s Ray Dalio. The point of Dalio’s all-weather strategy is that no one can predict what kind of economic environment we’ll see in the future so it makes sense to prepare for anything – inflation, deflation, rising economic growth or slowing economic growth.

Using the working assumption that there will be a wide range of possible outcomes and no one knows exactly what’s going to happen is an intelligent stance to take as an investor. The fact that a brilliant investor such as Dalio admits this fact tells you how hard investing truly can be (he has almost $150 billion under management).

Putting it All Together

Obviously, most financial planners would advise clients against putting all of their eggs into one basket — even if the basket were made of gold, silver, and platinum. Over the course of the thirty-two years examined in the Ibbotson study, the three equity classes (U.S. large-cap stocks, U.S. small-cap stocks, and international equities) outperformed all other asset classes.

However, it is important to note that during the high-inflation years of 1973 through 1984, the SPMI was the best-performing asset class, giving it the longest run of any of the asset classes.

Every investor knows that there is no one “best” asset class, and winning portfolios contain the best of many if not all, asset classes. This hunch, which most investors have, was proven empirically by the Ibbotson study.

Given this asset-class mix, the portfolio would have had a 6% annual rate of return from 1972 to 2004. But if 7.1% were invested in the SPMI, the expected return would be boosted to 6.2% while simultaneously minimizing risk (a Sharpe Ratio of 0.464 vs. 0.426 without precious metals — the higher the Sharpe Ratio, the better the risk-adjusted rate of return).

The Future of Precious-Metal Investing

Since at least the 1970s, “goldbugs” have been predicting an imminent economic collapse in the U.S. (if not the world) and citing this as the reason everyone should buy gold (or silver or platinum). While there are numerous signs pointing to a potential “Financial Armageddon” in the decades ahead, Ibbotson’s study proved that, even in the absence of a global economic implosion, precious metals help diversify, hedge, and improve the performance of your portfolio while limiting risk.

Every investor might think about putting between 7.1% and 15.7% of his or her portfolio into hard assets, but there’s no need to “hope it doesn’t work” — it will work. The only question is, how well?