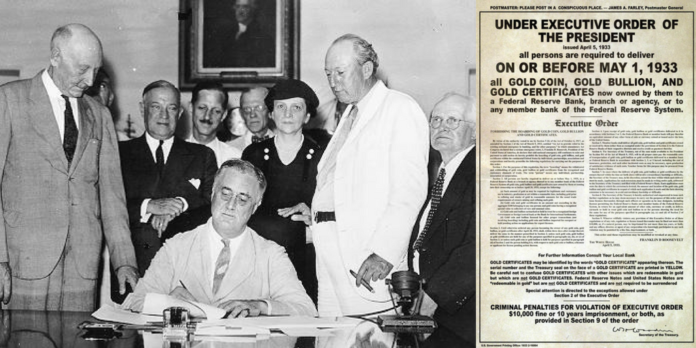 Our nation was founded with the sacred words, “We hold these truths to be self-evident, that all men are created equal; that they are endowed by their Creator with certain unalienable rights; that among these are life, liberty and the pursuit of happiness.” But in 1933, all that was shattered if by “pursuing happiness,” you chose to pursue gold.

The Foundations of the Great Confiscation
Confiscation all dates back to the Trading with the Enemy Act of 1917. That year, President Woodrow Wilson signed the “TWEA” into law, forbidding American individuals and businesses from engaging in trade with “enemy nations.” The world’s functional gold standard, which had overseen tremendous global economic growth in the early years of the twentieth century, was effectively halted by the outbreak of World War I, and the stage was thus set for the Great Depression and World War II.

Shortly after taking office sixteen years later, Franklin Delano Roosevelt signed Executive Order 6102 into law, prohibiting the “hoarding” of gold. Under this executive order, Americans were prohibited from owning more than $100 worth of gold coins, and all “hoarders” (i.e. people who owned more than $100 worth of gold) were forced, by law, to sell their “excess” gold to the government at the prevailing price of $20.67 per ounce.

Then, once the government had all the gold, FDR revalued the dollar relative to gold so that gold was now worth $35 an ounce. By simple decree, the government had thereby robbed millions of American citizens at a rate of $14.33 per ounce of confiscated gold, which is why most historians agree that the Gold Confiscation of 1933 is the single most draconian economic act in the history of the United States.

The Utilitarian Rationale Behind Confiscation

The reasoning behind the Great Gold Confiscation was, of course, the Great Depression, which had begun several years prior. After an inflationary run-up in prices and asset values, the stock market crashed in 1929, and the economy soon went with the crash.

Rather than responding to the situation with laissez-fair wisdom, President Herbert Hoover, often accused of being a proponent of laissez fair by those to whom the term is considered an epithet — instead raised taxes and erected new trade barriers, intensifying the misery. When FDR was elected, the people were willing to go along with nearly anything to try to alleviate the deflation that had gripped the country and strangled economic activity.

The boom of the 1920s was largely an illusory creature of the still-new Federal Reserve’s gross ineptitude, and by the thirties when reality had caught up to the loose-money standards of the prior decade, the money supply quickly contracted, causing deflation.

Like inflation, deflation also begets more of itself, and as prices dropped, it became wiser for the possessors of money to hold it rather than spend it, since prices would be lower the next day — and even lower the day after that — ad infinitum.

Since no one was spending money, businesses went under and people were out of the work, thus making the situation worse. In response, FDR knew what needed to be done — prices needed to be stabilized. On this, few would disagree. The exception economists take is with the implementation the president chose to pursue.

First, as discussed, private ownership of gold was effectively barred. The only exceptions were coinage worth $100 or less, or collectible coins, industrial uses, and jewelry. Gold could not be “hoarded” as a significant investment, and all “hoarders” were made to sell their gold to the government.

The Federal Reserve itself — a private banking cartel more so than an arm of government — was not excluded from this requirement either, as made clear by the Gold Reserve Act of 1934. That legislation required the Fed to surrender all gold and gold certificates held, to the United States Treasury.

Finally, the dollar was revalued, and U.S. Dollars was then redeemable at a rate of $35 an ounce, as opposed to the old gold standard of $20.67. However, it’s important to note that only foreign bankers and international governments could redeem their dollars for gold — private gold ownership was still illegal in the U.S. until the end of 1974.

The effect revaluation had on the U.S. dollar was an instant depreciation of 41%. Thus, prices were pushed back up again, in nominal terms, at least. What the long-term effects of this action would have been in the absence of World War II will never be known, but within a few years, the U.S. war economy was humming.

Following the end of the second great war, the U.S. stood alone as an economic super power, virtually untouched by the Axis or Allies, while most of Europe lay in ruins. It all made Roosevelt’s coercive and unconstitutional acts look ingenious, but scholars from the left and right continue to debate whether they were truly wise or if the New Deal was bailed out by global externalities.

So, under legally dubious means, FDR and Congress passed a law outlawing the private ownership of gold in excess of $100. Millions of Americans were made to trade in their gold coins for paper dollars — effectively at gunpoint. Then, once all the coins were in the government’s coffers, FDR revalued the dollar from $20.67 per ounce of gold to $35 an ounce — a theft of almost forty-once cents on the dollar.

Gold ownership remained illegal in the United States until 1954. That year, the Treasury Department legalized the ownership of rare coins. What was a rare coin? Well, since the government had seized all pre-1934 coins, then by definition, all such coins were deemed “rare.” After all, these coins were so uncommon that those few in circulation were worth much more than their face value or the value of the gold of which they were made — the coins had numismatic value. They effectively were no longer “money,” and thus they didn’t pose a competitive threat to the government’s fiat currency.

Gold, Government, and the Law

In 1969, the federal government further clarified the 1954 ruling and officially exempted “rare coins” from any future government confiscations — but still reserved the “right” for the government to seize its citizens’ gold in the future. “The basic principles governing the administration of the Gold Acts and Orders,” said the Treasury Department in 1969, “are that gold, as a store of value, can be held only by the government and that private citizens and entities in the United States can acquire gold only for legitimate and customary industrial, professional, and artistic purposes.”

Two years later, in 1971, President Nixon “closed the gold window” and took the U.S. dollar off the gold standard — making it a true fiat currency with no asset backing or intrinsic value. Four years after that, President Ford legalized the private ownership of all gold — not just rare coins — and gold has continued to be fully legal for the past thirty-two years. Or has it?

But why would the government confiscate gold? Some argue it did so in the past in order to revalue the dollar relative to gold, and since the dollar is no longer on the gold standard, the government would have no reason to confiscate gold. This is a good point, but it also begs the counter-argument: Now that the U.S. dollar is not backed by gold, it’s only a matter of time before the house of fiat-money cards crumbles. When this happens — when the government’s printing presses are incapable of printing money with any real value, then the government will certainly look to do something, and conveniently, laws on the books allow it to confiscate privately owned gold. It’s likely that the government could do this ostensibly to reinstate the gold standard!

In such desperate times, would rare coins be safe? It is impossible to know for sure, but it is certainly true the coins would be safer than bullion or non-rare coins. After all, look no further than to the first Great Confiscation in which many “patriotic” Americans willingly turned over their gold for paper money. Certainly, some Americans would do this again, especially if it were in the name of reinstating the gold standard. The government would probably promise gold redemptions would be
reinstated “in a matter of time.”

And while certainly not all goldbugs would willingly turn over their gold, there would be far less resistance to government confiscation of commodity-valued gold than there would be to the seizure of rare, numismatic coins. The government would not want to be in the business of coin dealing, at least not at first, and it would undoubtedly go after the low-hanging fruit — especially when laws on the books allow it to be legally picked.

Gold Confiscation: Could it Happen Again?
Although the U.S. dollar is constantly under pressure, the U.S. government continues to stockpile debt, and impossible-to-fulfill entitlement commitments loom on the horizon, the idea that the U.S. government would try to confiscate citizens’ gold today or anytime in the foreseeable future certainly seems spurious at best. After all, the government did so in the past in order to recalibrate the gold standard, which we have not been on since 1972.

The government might want to reenact gold confiscation, and most congressmen would feel no moral compunction about doing so, but logistically, it would seem virtually impossible in today’s globally interdependent and well-connected economy.

Investors might need to beware, however, if certain interest groups on the left and right get their way and begin building walls, both literally and figuratively, around the country in an effort to block that global interdependence. Protectionism and higher taxes led to the greatest depression in U.S. history, and along with it came gold confiscation. It would probably take a similar impetus for such a sequence of events to happen again.

Win With or Without ‘Financial Armageddon’

Silver investors should be aware of the potential of another Great Confiscation. But, a diverse portfolio of stocks, bonds, cash, and precious metals has worked the best over the past thirty years, and will probably work the best for the next thirty. And, as part of a hedging strategy, holding some rare gold coins — in addition to bullion — is undoubtedly a wise decision. Just in case.