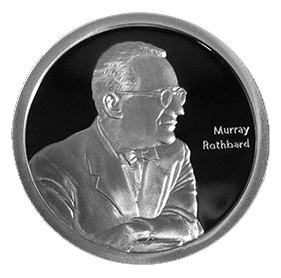 The Ludwig von Mises Institute recently began marketing a Murray Rothbard one-ounce silver round. “Make a statement for sound money with a beautiful new Rothbard silver coin,” reads the ad copy, which goes on to call Rothbard “the world’s greatest advocate for hard money.” That’s awfully high praise. Is it deserved? Just who was Murray Rothbard?

Murray Newton Rothbard was born March 2, 1926 in New York City. His parents were irreligious Jews, and young Rothbard was surrounded by leftist types, even Communists. This is probably where his love for playing the role of antagonist comes from.

Rothbard earned a Bachelors degree in mathematics and economics from Columbia University in 1945, and his Masters a year later. He received his PhD in economics in 1956, but while Rothbard is certainly among the greatest economists of the twentieth century, he was much more than just that: he was also a political theorist, historian, polemicist, and even a playwright.

Rothbard’s greatest contribution to economics was his magnum opus, Man, Economy, and State. As a complete treatise on economics, many view it as even greater than Ludwig von Mises’s Human Action, as it is more easily digested by laypeople. Man, Economy, and State explains it all, from the fundamentals of human action to the structure of production in a market economy. Interestingly, the final seven chapters of MES were omitted from the original work for political reasons, as they called for a complete and total “free market” – or, as it would later be referred to, “anarcho-capitalism.”

Anarcho-capitalism fused classically liberal political ideology with pure free-market, Austrian economics. While Austrian economics are said to be “value-free,” Rothbard took classical liberalism further than it had ever been taken with the ultimate value being the non-initiation of force, and added these values to his Austrian understanding. Rothbard thus found intervention in the market not only inefficient, but intolerably immoral. With this understanding, there is no room whatsoever for an involuntary government, even if it’s democratic.

Anarcho-capitalism differs from other flavors of anarchism significantly. Anarchism originated out of socialism, with anarchists being the more radical of leftists in the late nineteenth and early twentieth centuries. While some of these anarchists’ ideas are appealing to free-market types, the early anarchists lacked a proper understanding of economics, and thus, much of their ideology was confused and even contradictory. Anarcho-capitalism, by contrast, comes out of the classically liberal tradition, which was the “middle road” of sorts between socialism on the left and conservatism (defense of monarchy and the aristocracy) on the right. Thus, while anarcho-capitalists and other anarchists might share the same conclusions, they start with such different basic premises that they still have a hard time getting along – sort of like constitutionalists and socialists at an anti-war rally.

Today, some “Rothbardians” reject the term “anarcho-capitalism.” They think “capitalism” itself has become a dirty word. These free-marketeers prefer the term “market anarchism,” which is essentially synonymous with Rothbard’s anarcho-capitalism. Other similar and related creeds include voluntaryism, and the more specific, agorism, which offers a strategy for achieving anarcho-capitalism at large. This strategy is to abstain from voting and other forms of political activism, and to use the black market for as many transactions as possible, in order to deny the government with legitimacy and tax revenue.

Rothbard’s strategy, by contrast, was political. He was a friend and mentor to Ron Paul, supporting his presidential candidacy in 1988. Paul, of course, is a libertarian, and was actually running on the Libertarian Party ticket at that time. The first candidate Rothbard supported, by contrast, was the segregationist Strom Thurmond, who ran on the Dixiecrat ticket in 1948. Rothbard, a Jew, was no racist, but he supported Thurmond because he, like Ron Paul forty years later, was for “states’ rights” over the federal government. In the 1960s, Rothbard  joined the Peace and Freedom Party and tried to spark an alliance between libertarians of the “Old Right,” and the young and anti-government “New Left” of the time. Later, he supported Pat Buchanan for president – despite strong disagreements with Buchanan’s opposition to free trade (and on other matters).

No matter what, Rothbard always aligned himself with whatever interests he thought advanced the anti-government cause, and he was always resolutely anti-war: in fact, Rothbard said that the only wars the U.S. was justified in fighting were the Revolutionary War and the Civil War, although the latter only from the perspective of the secessionist South.

Rothbard was a great economic historian, too. His PhD dissertation investigated the Panic of 1819, and is considered even by opponents to be an indispensable piece of historical research. His book on The Great Depression painstakingly makes the irrefutable case that Herbert Hoover was not for laissez-faire, that laissez-faire was not the cause of the Depression, and that FDR’s New Deal was not the cure. And, in a work of non-economic history, Rothbard’s The Betrayal of the American Right is a great look into how American conservatism went from being anti-war and anti-imperialist, to what it is today. Always a bit of a conspiracy theorist, Rothbard even suggests that it may have been part of a CIA plot!

As of December 7, 2011, the Rothbard silver coin is selling for $45. This is a $17+ mark-up over the spot price of silver, and a roughly $10 mark-up on the price you can expect to pay for a single Silver Eagle. However, the coins are beautiful and have some collector’s appeal. Plus, purchasing from the Mises Institute benefits a good cause. These coins are not necessarily recommended for investment purposes, but they would certainly be welcome by any silver-loving anarchist on your Christmas shopping list.