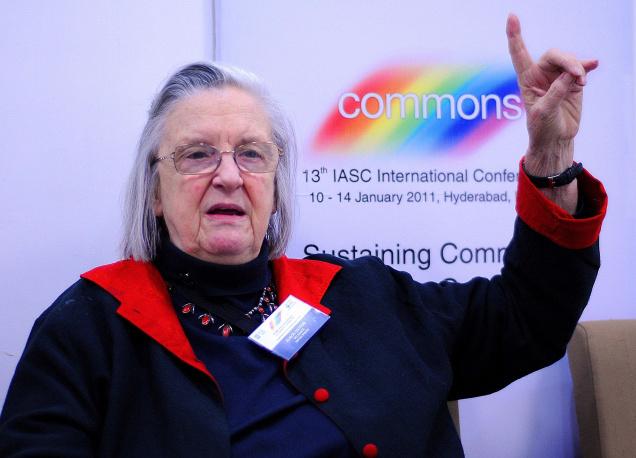 Elinor Ostrom died last week at the age of 78. She was best known for sharing the 2009 Nobel Prize in Economics for her analysis of the economic governance of the commons. She was the first woman to win the award, and arguably one of the very few winners of either gender to actually deserve it. Ostrom lived in Bloomington, Indiana, and worked at Indiana University, where she was a professor of Political Science and co-director of the Workshop in Political Theory and Policy Analysis. 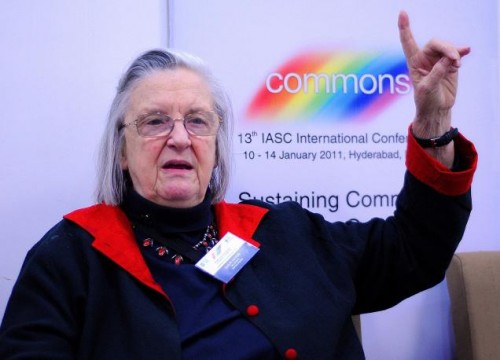 When Ostrom won the Nobel Prize, conservatives were disappointed. Liberals, who are generally oblivious to economics, were split (to the extent that they were even aware of Ostrom winning the award), as were libertarians. Was Ostrom a radically anti-private property socialist, as some believed? Or was she an equally radical anti-government anarchist? Was she both? Neither? It really depends on who you ask, and how you define the terms.

Ostrom’s life was dedicated to studying how human beings managed common resources in the absence of government regulation. The common in common resources is key here, because to Ostrom, privatization was not the solution. This, in the eyes of statist conservatives, made Ostrom a socialist. Statist liberals may have liked what some perceived as Ostrom’s antipathy towards private property, but they couldn’t tolerate her anti-statism. Libertarians, like liberals, were also divided: Some libertarians believe that every inch of the Earth should be privately owned, and thus there should be no common resources. Other libertarians, such as Less Antman, disagree.

According to Ostrom’s studies, societies can successfully manage common property by having clear rules for its use, established by the property’s users. The property’s users must then actively monitor their fellow users, as it is in everyone’s best interest to make sure collective property isn’t misused. When disputes over the improper usage of the property arise, there must be methods for dispute resolution. And if someone is found guilty of violating the user-established and agreed-upon rules, there must be penalties.

If socialism is the rejection of the notion that everything on Earth needs to be owned by someone, then Ostrom was a socialist. But if socialism means that government central planners should be in charge of managing resources, then Ostrom was one of the most radical anti-socialists of our time. For free-market libertarians, who believe strongly in private property, Ostrom’s findings are admittedly challenging, but also encouraging. If the problem of the commons – one of the most economically difficult problems there is – can be solved without the state, then do we really need the state to regulate wages? Do we need the state to prevent monopolies? To ensure a clean environment? To provide collective security? The answer to all these questions, according to logic extrapolated from Ostrom’s work, is a resounding “no!” For this, Elinor Ostrom and her work should be celebrated by all champions of the free society.