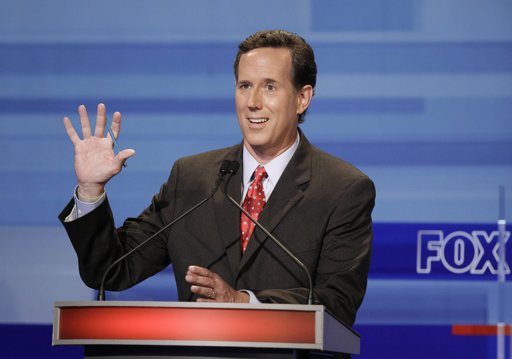 “Conservative” Rick Santorum does not support abolishing the Federal Reserve. This is no surprise, really. Santorum does not claim to be freedom-oriented, but instead, focused on the government-led propagation of so-called “conservative” values. He openly loathes the Constitution and hates federalism. The ends justify the means in Santorum’s ideology, and the Fed is the means by which war and other big-government “conservative” programs are funded. Then again, it is doubtful that someone as economically ignorant as Santorum is even truly aware of how dependent his big-government “conservatism” is on fiat-money central banking.

Below is a video where Santorum is asked questions about the Federal Reserve’s zero-interest rate policy. Although he admits that he is “not particularly skilled” in the area of economics, he still finds it appropriate to opine on economic issues. Here are a few choice comments.

Let’s look at each of these items individually after the video.

Well, first, we need to differentiate between real inflation and what the government has redefined inflation to be. The real definition of inflation is expansion of the money supply. When there is more money in circulation, that is by definition inflation! Rising prices are simply a symptom of inflation – not inflation itself.

The government, of course, has redefined inflation to mean “rising prices” – but what prices? How can one take all prices of all things into account to know how much inflation there is? One cannot. So, instead, we’re supposed to trust government central planners to establish formulas for measuring “inflation.” These measurements, of course, are subject to political manipulation, just like in the novel 1984. In fact, it was around 1984 that President Reagan first decided to take housing out of inflation calculations in order to make it look like his big-spending administration had tamed it!

The government’s primary measure of so-called inflation is the CPI, or Consumer Price Index. It tracks the prices of a basket of goods over time, to see how much the dollar depreciates. Since the establishment of the Fed in 1913, the dollar has lost more than 95% of its value – according to the government’s own numbers. These numbers actually grossly understate the truth, especially with the deletion and substitution of items by Presidents Reagan and Clinton. But when the government wants to make inflation look even lower, they turn to “core CPI” – what Santorum ignorantly refers to as “core inflation.”

Core CPI is the Consumer Price Index, excluding food and energy – as if those items aren’t important! Now where are prices going up the most right now? In food and energy. And what items do most people need more than any others? Food and energy – and housing, which, of course, was deleted from CPI by the Reagan administration. Now that housing prices are on the decline, I wouldn’t be surprised to see it reinserted into CPI to make the numbers look better – I’m sure Santorum would approve. After all, Ronald Reagan, the biggest tax raiser in the history of the United States, is a hero of Santorum’s.

So when Santorum says that the Fed needs to be “focused on core inflation rates,” he is ceding the idea that inflation is defined by the U.S. government, and not by free-market economics. Furthermore, he is trusting the big-government central planners to determine what items are key in the calculation of the mythical “price level.” Third, and most importantly, he seems to subscribe to the idea that inflation happens on its own, and that the Fed’s job should be to contain it – rather than acknowledging the plain fact that the Fed itself is the source of inflation, both by the real definition of the term and Santorum’s own imaginary one.

‘The Fed Needs to Respond’

Santorum says, “We are seeing some indication that core inflation is beginning to creep up; the Fed needs to respond to that issue.” What are the tools at the Fed’s disposal?

The Fed can set a new fed-funds rate target. The fed funds rate is the rate at which Federal Reserve member banks lend each other money in overnight loans. The Fed itself does not establish this rate – it is set by the (unfree) market. But the Fed, the ultimate anti-market institution, can have an effect on this rate by buying and selling bonds, and raising or lowering the discount rate, which is the rate at which the Fed makes emergency loans to member banks. The Fed can also change reserve requirements, which allow member banks to counterfeit more.

In saying the Fed “needs to respond,” Santorum is endorsing this entire system of fiat money and debt. When the Fed buys bonds, it monetizes U.S. government debt. Therefore, there needs to be debt for the Fed to monetize. Santorum is actually endorsing a policy of the Fed selling these bonds, or bidding lower amounts on new bonds, in order to push interest rates up, but he does not reject the entire system as socialistic, immoral, and inefficient, as he should. Furthermore, in “addressing” the “creeping” core inflation, what Santorum is actually saying is that the economy is getting overheated and needs to be choked off – tell that to the millions of Americans on unemployment or who’ve given up looking for jobs!

In choosing “core inflation” as his measure, Santorum shows how out of touch he is, not only with the science of economics, but with American families. Food and energy are expenses, too – they’re big ones. And purposely causing a deepening of the recession in order to stall “core inflation” is a cure worse than the disease. What’s more, it’s medicine more akin to a shot of heroin to an addict in withdrawal. A real, long-term cure, is a return to the gold standard – something Rick Santorum opposes.

Rick Santorum claims to want an audit of the Federal Reserve, but at the same time, he says we should “trust” them. He says the only real problem with the Fed is that they are charged with two things: controlling inflation and keeping unemployment at a minimum. If the Fed would only just focus on inflation – no, correct that, “core inflation,” – then everything would be fine. The politicians, like Rick Santorum, should set the Fed’s policy; direct them to focus only on core inflation, and then let them – the central planning experts – make the right decisions.

First off, why bother auditing the Fed if they’re trustworthy? Obviously, Ron Paul has raised the stakes to the point that even someone like Santorum has to say he favors a Fed audit. But Santorum is a socialistic central planner at heart, content to leave experts to run the economy, rather than the free market. You see, in Santorum’s view, it is just a slight mistake in policy, the notion that the Fed should care about unemployment rather than just core inflation, that has led to the economic calamities of the past 99 years.

Only it hasn’t. The Fed itself is an abomination that must be abolished. And it will be abolished – in time. The question is whether or not we will have a country left by the time the Fed is done with it. 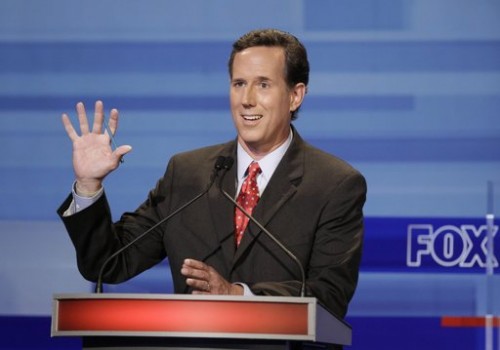