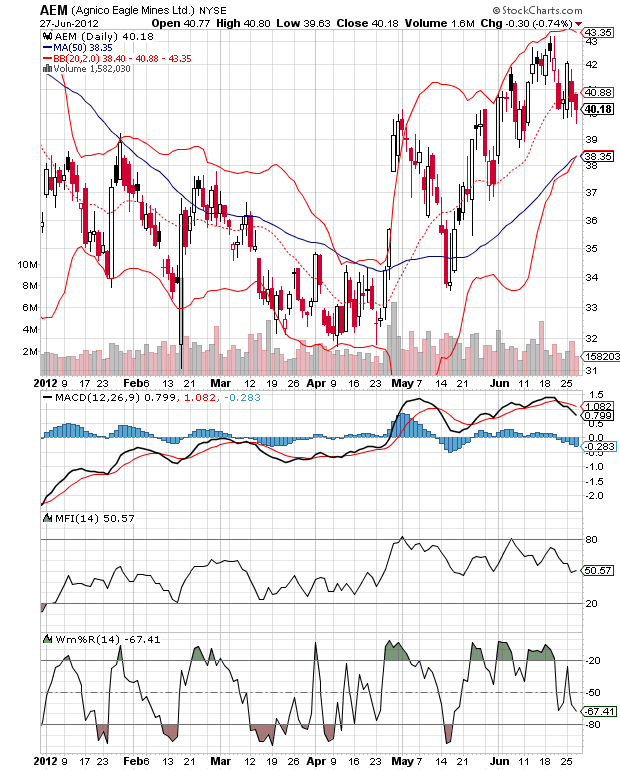 Agnico Eagle Mines Ltd is a Canadian company engaged in the production, development, and exploration of gold in North American (Canada, the U.S., and Mexico) and Finland. The company had just one mine in 2008, but has brought five new mines on line in rapid succession. In 2011, Agnico Eagle produced approximately 950,000 ounces of gold. At the end of the year, its gold reserves totaled 18.8 million ounces. Its market cap currently stands at $6.87 billion. Shares of Agnico Eagle trade on the New York Stock Exchange under the ticker symbol AEM.

This is the third in a series of articles analyzing the current status of gold stocks. Earlier this year, Silver Monthly analyzed several silver stocks, and we reviewed some common investment concepts in our first analysis of Silver Wheaton. To brush up on some terminology, go to that article. Otherwise, continue reading.

Last quarter, Agnico Eagle beat earnings expectations by 59.5%, growing EPS by 34%. Over the past three quarters, it has grown earnings per share at an average pace of 14%. But for the current quarter – the results of which will be announced on July 27 — Agnico is expected to see EPS fall by 27%, which is worse than originally expected.

Why is Agnico seeing earnings fall even as sales are on the rise? It’s because it has gone from a one-mine company to a six-mine company very quickly – some might say too quickly. Agnico still has a pretax profit margin of 28.3%, but it can’t post positive earnings due to its massive operating expenses. In 2008, this number came in at just $11.5 million, whereas in 2011, it was $1.29 billion! Long-term, things may work out for Agnico, but in the short term, its income statement is a mess.

Agnico Eagle avoids political risk by mining in North America and Finland, while its competitors are in geopolitical hotspots in Africa, the Middle East, and South America. That’s all well and good, but what’s not so hot is the fact that Agnico’s new mines have much higher production costs than its original flagship mine, LaRonde. This is why Agnico’s profits have been squeezed out of existence and the company is almost definitely going to post a second consecutive year in the red for the first time ever. And while Arctic Canada doesn’t have much in terms of political risks, there are extreme challenges associated with the remoteness and bone-chilling temperatures, which are leading to lower-than-expected gold production.

On May 15, Agnico Eagle fell below its 50-day moving average and looked to be headed lower. However, it shot back up the following day, and then went into a bullish trend. On June 19, the stock basically hit its upper Bollinger band and, predictably, has been heading lower since. It also saw its fast moving average fall below its MACD indicator line last week, which is another bearish sign.

This is another stock where the cons clearly outweigh the pros. Agnico Eagle’s income statement is a mess, its valuation metrics are unattractive, and its technicals don’t look good either. If you want to buy a gold stock, look elsewhere – at least for the time being.