AngloGold Ashanti Limited is a South Africa-based global gold producer with mining operations in eleven countries on four continents. As of the end of 2011, AngloGold Ashanti had proven reserves of 75.6 million ounces of gold. The firm has a market cap of $12.3 billion, and its ADRs trade on the New York Stock Exchange under the ticker AU. On Wednesday, July 11, AngloGold Ashanti closed at $32.40 per share.

This is the sixth in a series of articles analyzing the current status of gold stocks. Earlier this year, Silver Monthly analyzed several silver stocks, and we reviewed some common investment concepts in our first analysis of Silver Wheaton. To brush up on some terminology, go to that article. Otherwise, continue reading.

AngloGold Ashanti is the third largest gold producer in the world. It came into being in 2004, when Anglo American merged its gold assets with Ashanti Goldfields. Anglo American sold its last stakes in the company in 2009. Now AngloGold Ashanti is focused on expanding its production away from South Africa. This is wise, since right now, AngloGold’s costs are above average, thanks to the fact that South Africa and continental Africa tend to be higher-cost gold mining districts.

Historically, AngloGold has invested less in growing its business than most of its peers, which has resulted in exactly what you’d expect: slower growth. This is because AngloGold Ashanti had hedged against falling gold prices by selling forward contracts, and this prevented the firm from benefitting from the recent explosion in bullion prices. In late 2010, AngloGold finally eliminated the last of its hedges – just in time for the gold price to crash! On the positive side, this also freed up more cash for AngloGold Ashanti to make investments and to try to lower its production costs by diversifying its business base.

AngloGold Ashanti is growing in Australia and South America, which have lower costs than Africa – but these operations won’t be in full swing for years. In the meantime, the firm and its investors have to contend with serious geopolitical risks by operating in the Democratic Republic of Congo and Mali. Even Argentina, where AngloGold has a lot of its South American operations, is a political hotbed. AngloGold Ashanti’s management has made the right decision to try to diversify out of Africa, but it may have come too late.

But how about more recent data? Last quarter, AngloGold Ashanti beat earnings expectations and grew EPS by 98%. This brought its three-quarter average for EPS growth to an amazing 262% per quarter! Estimates for the current quarter – the results of which will be announced on August 4 – project a 20% decline in earnings per share, but this is still better than previously expected, as management raised guidance at the company’s most recent earnings call. Sales were up 20% last quarter, which is good.

From a technical perspective, AngloGold Ashanti looks as though it may be oversold, with a Money Flow Index of 26.75 and a Williams %R of -92.07%. Still, this doesn’t move me to want to buy the stock, even in the short term, as its chart is in a clear and inarguable downtrend, riding its steeply descending bottom Bollinger band lower. AngloGold Ashanti may be nearing a bottom, and it may indeed launch into a bullish surge back to the high $30s – but stock-picking is a probabilities game, and stocks with charts like AngloGold Ashanti are just not statistically likely to do anything but continue losing ground. 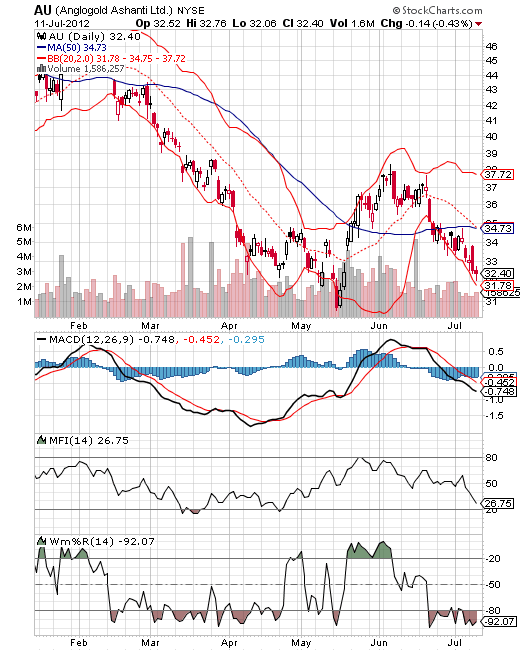 In conclusion, with AngloGold Ashanti, we have yet another gold stock that looks to be headed lower. Yes, its valuation metrics make it look like a good buy, but with its business-model problems and a textbook bearish chart, there are definitely better buys out there than AngloGold Ashanti. Even the ultra-low MFI and Williams %R aren’t enough to make me want to give AngloGold a second look. And I don’t think you should, either.