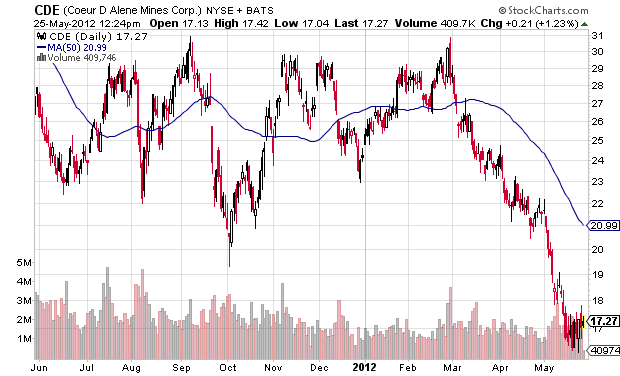 Coeur D’Alene Mines Corporation explores for and produces both silver and gold, although almost all of its annual production of fifteen million ounces is in silver. Coeur D’Alene’s primary properties are the Silver Valley Mine in Idaho, and the Rochester Mine in Nevada. The firm has a mine in Chile, another in Argentina, and is developing mines in Bolivia and Alaska. In 2011, Coeur D’Alene reported net income of $93.5 million on total revenue of $1.02 billion. Its market capitalization is $1.54 billion, and its shares trade on the New York Stock Exchange under the ticker symbol CDE.

This is the second in a series of 2012 silver stock reviews. In our first, we explained various stock-trading terms, such as price-to-earnings ratio (P/E ratio), how earnings are measured on a year-over-year basis, etc. For a review of these concepts see our earlier review of Silver Wheaton. Otherwise, carry on.

Last quarter, Coeur D’Alene beat earnings expectations by 70.4%, growing earnings per share (EPS) by 10%, year-over-year. This represented accelerated earnings growth compared to the last quarter’s growth, which was less than 10%. However, on the downside, Coeur D’Alene’s management guided expectations for the current quarter – the results of which will be released on August 8 – lower, to -44% year-over-year. That’s not good.

Coeur D’Alene has a very good pretax profit margin of 28.9%. Its annual return on equity, however, is not so great at 11.1%. Coeur D’Alene’s balance sheet looks good, with a debt-to-equity ratio of 0.5-to-1.

Coeur D’Alene’s trailing P/E ratio is 18.0, compared to an industry average of 14.0. By contrast, its price-to-sales and –cash flow ratios are much better than the industry averages, coming in at 1.5 and 3.9, respectively; compared to 5.1 and 11.2, respectively, for the industry. And best of all, Coeur D’Alene has a price-to-book ratio of 0.7, which means that the stock is currently trading at a discount to its net-asset value. However, Coeur D’Alene is not projected to see much growth, and on a forward basis, its low P/E of 6.2 still yields a high PEG of 3.1. In summary, the valuation metrics of Coeur D’Alene are a mixed bag, seemingly contradicting one another. 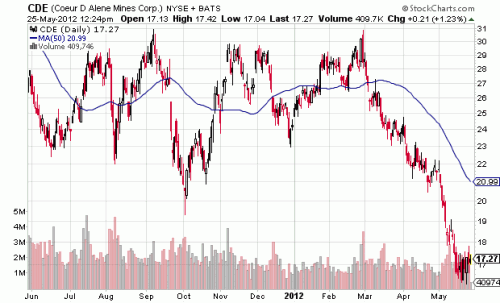 Coeur D’Alene looks good for two reasons: First, its price-to-book ratio is less than 1.0, which means it is trading at a discount to its net-asset value. This means that Coeur D’Alene could file for bankruptcy, sell all of its assets, pay back all of its creditors, and then still have enough left over to pay its shareholders $1 for every $0.70 worth of stock that they held. By buying Coeur D’Alene, you are actually spending $1 to get $1.42 worth of its net assets!

On the flip side, there are numerous factors making Coeur D’Alene look like a bad buy. Chief among them, its earnings deceleration, which has been the catalyst for its share-price decline. This deceleration shows no signs of abating, and thus, Coeur D’Alene’s share price is more likely to suffer losses than not – or at the very least, Coeur D’Alene’s shares have a greater chance of suffering additional losses than other silver stocks. For this reason, Coeur D’Alene does not appear to be a good buy given its current valuation and the availability of other silver investing options.