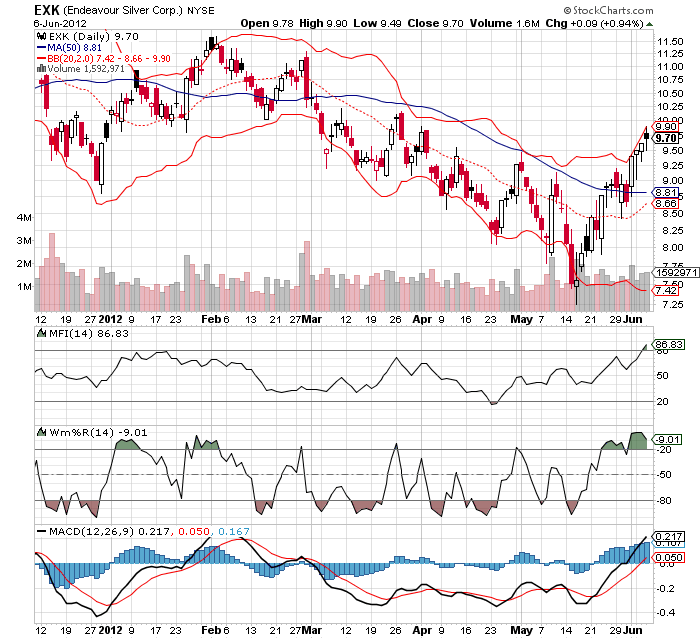 Endeavour Silver Corporation is a Canadian company with operations in Mexico. Endeavour explores for precious metals, develops mines, and acquires existing precious-metals properties from other firms. As its name implies, Endeavour Silver’s focus is on silver, although its mines also produce some gold. Since its inception in 2004, Endeavour has posted seven consecutive years of aggressive silver-production growth. The firm has a $854 million market cap, and its shares trade on the New York Stock Exchange under the ticker symbol EXK.

This is the sixth — and presumably last — in a series of 2012 silver stock reviews. In our first, we explained various stock-trading terms, such as price-to-earnings ratio (P/E ratio), how earnings are measured on a year-over-year basis, etc. For a review of these concepts see our earlier review of Silver Wheaton. Otherwise, carry on.

In 2011, Endeavour Silver Corp reported net income of $18.76 million on sales of $128 million. Earnings were up from 2010’s $7.1 million, which was the first year in which Endeavour turned a profit. Revenue has increased every year since 2006, the first in which Endeavour had any revenue at all. Over the past three years, Endeavour has grown sales at an average pace of 69% per year, and earnings at an average pace of  68% per year.

Last quarter, sales were up 39%. Earnings beat expectations by 37.5%, growing at a year-over-year pace of 29%. However, estimates for the current quarter – the results of which will be announced on August 3 – were revised lower to +8%. Nevertheless, for the year, earnings per share are expected to more than double according to some estimates.

Endeavour’s balance sheet looks even more impressive than its income statement. The firm has zero long-term debt and an annual return on equity of 19.7%. Endeavour’s annual pretax profit margin is 38.5%.

Endeavour Silver Corp closed at $9.70 on Wednesday, June 6, up 0.94% for the day. Intraday, shares went as high as $9.90. This puts the stock right at its upper Bollinger band, which would normally at least threaten to act like resistance, but with the upper band steeply ascending, this is less of a concern. What is of greater concern, however, is the stock’s MFI of 86.83 and Williams %R of -9.01% — both of these stats indicate the stock is overbought in the short-term, and due for a correction. 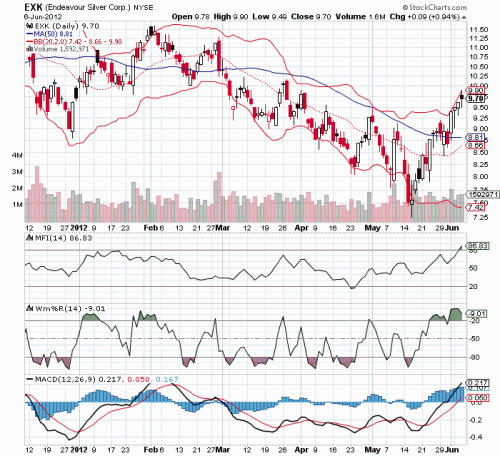 Although Endeavour Silver Corp has a solid history of aggressive and impressive growth, given its current valuation in the face of decelerating earnings growth, it doesn’t look like now is the right time to buy Endeavour. As a short-term play, it looks overbought and due for a correction. Could Endeavour Silver surprise and go higher, bursting through its upper Bollinger band and beyond? Of course. But with so many other silver stocks to choose from, Endeavour looks too risky for my tastes.