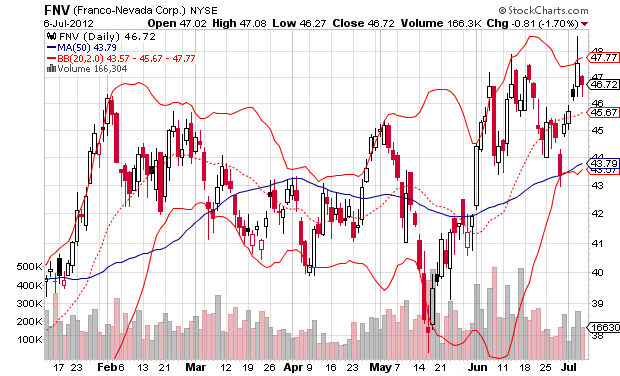 Franco-Nevada Corporation has an interesting business model. Instead of investing in mines and the development of gold properties, Franco-Nevada purchases stakes in existing mines and receives royalties from the gold produced by other miners. Franco-Nevada also has some interest in platinum metals, oil, gas, and other assets. The company’s portfolio is diverse both in the types of assets, and in the location of them, with royalty properties in the United States, Canada, and Australia. Franco-Nevada’s shares trade on the New York Stock Exchange, under the ticker symbol FNV. As of July 6, Franco-Nevada was capitalized at a market value of $6.73 billion.

This is the fourth in a series of articles analyzing the current status of gold stocks. Earlier this year, Silver Monthly analyzed several silver stocks, and we reviewed some common investment concepts in our first analysis of Silver Wheaton. To brush up on some terminology, go to that article. Otherwise, continue reading.

Last year, Franco-Nevada reported a net loss of $6.8 million on record revenue of $411.2 million. However, last quarter, the firm grew EPS by 63% year-over-year, and over the past three quarters, it has averaged EPS growth of 92% per quarter. Estimates for the current quarter were revised lower, but earnings per share are still expected to grow by 23%, year-over-year. And for the year, Franco-Nevada is expected to grow earnings by 18.5%.

Revenues were up 44% last quarter, beating Franco-Nevada’s three-year average for annual revenue growth of 42%. This is especially great considering how depressed the gold price has been thus far in 2012. Franco-Nevada has a huge pretax profit margin of 48.5%. It has $1 billion in cash, and zero debt – now that’s a balance sheet that truly is “good as gold.”

Franco-Nevada’s 322.6 trailing P/E reflects its 2011 dip in earnings. More telling is its 21.3 price-to-cash flow ratio, which is just about in line with its 21.2 five-year average. However, it’s difficult to say if this is a fair valuation or not, since there really aren’t a lot of other firms with Franco-Nevada’s business model. Thus, its 2.2 price-to-book ratio and 13.8 price-to-sales ratio are also hard to compare.

What’s not so hard to comprehend, though, is Franco-Nevada’s 1% dividend yield. Franco-Nevada increased its dividend by 25% in 2012, and has increased it for five consecutive years. That’s sure to keep income-oriented investors interested, which promises a sort of a price floor or support for the rest of us.

As stated in the introductory paragraph to this analysis, Franco-Nevada has a unique business model that puts it somewhere between a gold miner and a gold ETF. Compared to the latter, Franco-Nevada is a more leveraged play on gold – which, of course, can work both ways. It also pays a bigger dividend. When compared to gold miners, the biggest difference is that Franco-Nevada has zero capital costs, operating costs, or environmental costs – but it’s still a leveraged play on gold. If this seems “to good to be true,” just consider that Franco-Nevada has greatly outperformed both gold and gold-mining stocks since the end of 2007.

Franco-Nevada is a “double hedge” against inflation, too, as it not only serves as a hedge the same way all gold-related investments do, but since it doesn’t operate its own mines, it also avoids the ever-rising costs of doing so.

Franco-Nevada’s business model is very appealing, and its balance sheet is basically flawless. However, its financials, as a whole, are mixed, and its valuation is difficult to peg, given the uniqueness of its business model. The company’s dividend is nice and easy to appreciate, but its technicals are equally easy to understand while not-so-nice.

On June 28, Franco-Nevada sold off to $43.36 and caught double-support at its 50-day moving average line and bottom Bollinger band. From there, it surged to as high as $48.63 on July 5 – a new 52-week high. Now, seriously, what is a gold-related stock doing hitting a 52-week high in this market? I don’t know, and neither did traders, as Franco-Nevada has been trending lower since, and appears poised to return to that bottom Bollinger band. There, perhaps it will find support and reenter bullish mode. But until then, it looks to me like Franco-Nevada is not a great buy.