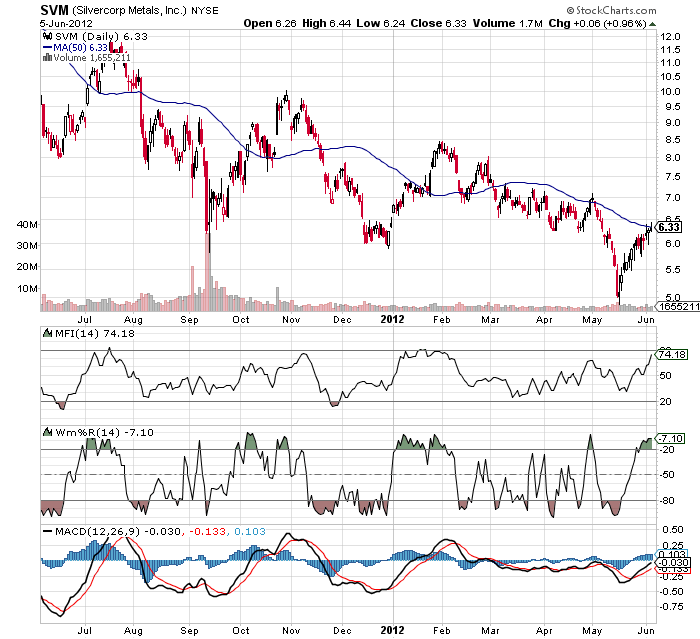 Silvercorp Metals is a Canadian company that explores for, develops, and acquires silver properties in China, producing silver and other minerals. Currently, Silvercorp operates four silver, lead, and zinc mines at the Ying Mining Camp in the Henan Province of the PRC. For the most recently reported fiscal year,  Silvercorp had net income of $68.85 million and sales of $167.33 million. The stock has a $1.08 billion market cap, and its shares trade on the New York Stock Exchange under the ticker symbol SVM.

This is the fifth in a series of 2012 silver stock reviews. In our first, we explained various stock-trading terms, such as price-to-earnings ratio (P/E ratio), how earnings are measured on a year-over-year basis, etc. For a review of these concepts see our earlier review of Silver Wheaton. Otherwise, carry on.

As of Tuesday, June 5’s close, Silvercorp was just 0.03% above its 50-day simple moving average line. This line normally offers price support, and being virtually right on the line means the stock is right at support – and it normally takes a lot to push a stock below its support line. That said, Silvercorp is in very attractive technical positioning. However, should it fall below that line, then the line will work like resistance, rather than support, and Silvercorp would then likely have a hard time pushing past the line. By the time you read this article, the stock has probably begun trading on Wednesday June 6 and, from a technical perspective, what it does in early trading will have a big impact its short-term desirability.

Some other short-term technicals to consider: As of June 5’s close, Silvercorp had a Money Flow Index (MFI) of 78.45 and a Williams %R of -7.1% — both of these stats suggest that the stock is overbought and perhaps due for a correction. Its fast moving average pierced its MACD indicator line, which is bullish, back on May 24, but the stock has gained 4.6% since then, which means that story could be over. 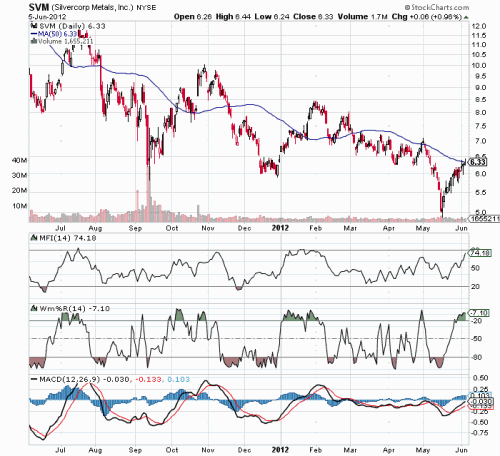 Finally, Silvercorp has a short ratio of 5.6. This means that it would theoretically take 5.6 trading days for all of Silvercorp’s short sellers to cover their short sales, assuming average daily trading volume. Whenever a stock has a short ratio of greater than 5.0, this is considered a bullish sign, because the greater proportion of shares sold short relative to average daily trading volume, the harder it is for short sellers to cover their shares without having an impact on the share price. This can lead to what’s known as a “short squeeze,” where short sellers begin buying back their borrowed shares, thus pushing the price of the stock higher, and this in turn makes more short sellers want to cover, etc. – it can be a vicious cycle for the short-selling speculators, or a it can be a thing of beauty if you are long the stock in question.

There are a lot of conflicting data in this analysis. As far as Silvercorp’s income statement goes, its numbers over the past few years look great, but its more current data show rapidly decelerating growth, which is never good. Meanwhile, Silvercorp’s balance sheet and valuation metrics look great. Technically, it looks overbought in the short term, but over-shorted at the same time.

Really, as a short-term play, it all boils down to what Silvercorp does in early trading on Wednesday, June 6, and especially where the stock closes that day. If it can hold to close above its 50-day SMA, then the stock could be set to soar. If it falters, though, it could be headed back down to its nadir.