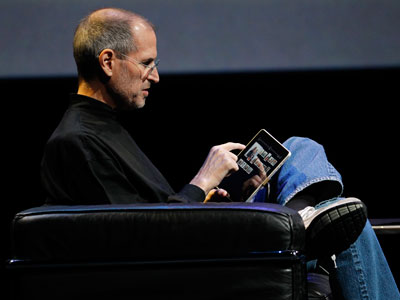 Steve Jobs did more for humanity than any politician, mystic, activist, or charity worker who ever lived. He was motivated, by profit, to create; and thanks to his creations, the world became a better place.

Jobs founded Apple with his good friend and fellow Phone Phreaker Steve Wozniak in 1976. Jobs was 21 and Wozniak was 26. At this time, the idea of having computer in the home was science fiction at best. But Jobs was a visionary. He was among the first to see the potential in a mouse-driven, graphical interface for personal computing. This led to the creation of the Macintosh, the first commercially successful modern computer. Most people agree that Bill Gates appropriated Jobs’s ideas for the development of Windows.

In the mid-80’s, Jobs recruited Pepsi executive John Sculley to be Apple’s CEO, promising him that together they could change the world. Jobs was half right. A year after Sculley took the reins, he fired Jobs from the company that Jobs had created. This led to a dark time for Apple, as the company became a laughing stock for the next twelve years; but it was not a dark time for Steve Jobs.

In 1985, jobs founded NeXT Computer. A year later, he purchased The Graphics Group from Lucasfilms. Jobs later renamed the company Pixar. He purchased the company for $10 million and, after building it up overseeing hit films like the Toy Story franchise, sold it to Disney for a whopping $7.4 billion. This was after Apple acquired NeXT Computer in 1997, bringing Steve Jobs back into the fold.

This, of course, is where Jobs really became an icon.

He already changed the world once with the advent of desktop, mouse-driven, graphically interfaced computers. Then he changed it again with the iPod: a portable music player capable of storing a room full of records in the palm of one tiny hand. Then came the iPhone, revolutionizing the way we communicate, as other smart-phone makers sought to copy what Jobs had created, just as Bill Gates had done years before with Windows. As Jobs’s final hurrah, the iPad – originally mocked as a useless hybrid – is promising a new age of tablet computing.

Steve Jobs attended just one semester of college. He died with $8.3 billion in assets. He created for the joy of creating. But he also was clearly motivated by profit. As a Buddhist, Jobs did not seem to care much for material things. He dressed in modest black shirts and blue jeans. But the incentive to build wealth was clearly there: had it not been, then he would have simply given away all that he created for free. Instead, Jobs built wealth, reinvested what he earned, and created bigger and better things – these things would not have been possible had he not been motivated by profit. He was a real-life Hank Rearden, the protagonist of Ayn Rand’s Atlas Shrugged. Coincidentally – or not – Jobs’s friend and Apple co-founder Steve Wozniak claims that Rand’s book was a guide in Jobs’s life.

Men and women like Steve Jobs are the true heroes of civilization. They are motivated by profit, and in their pursuit of profit, they create the things that make our lives better. The politician does not create; he destroys. The mystic offers nothing but false promises. The activist seeks to wield the violence of laws to coerce us into doing what he thinks we should be doing. The charity worker does not build the wealth that would actually lift people out of poverty. All of these characters will condemn the profit motive, but in doing so, they seek to prevent geniuses like Steve Jobs from giving their gifts to the world.