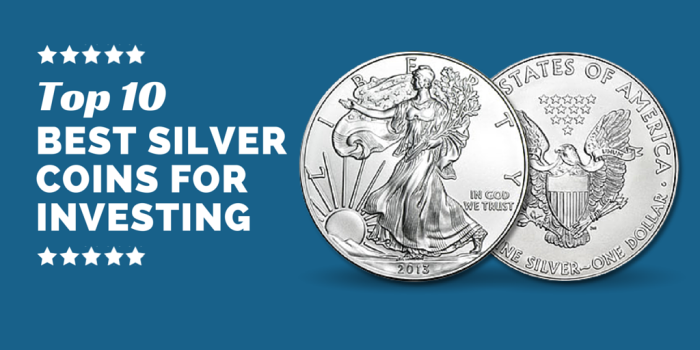 Most people fantasize about finding a “diamond in the rough”—a rare collectible coin handed out as change from Wal-Mart—but as an investment strategy, silver numismatics coins are less attractive than silver bullion coins.

Why? Because the price of silver is set to skyrocket. Currently trading at around $18.50, many analysts see silver at $50 or higher within the next year or two. Having too much money tied up in numismatics means you could miss out on the coming silver explosion.

With that in mind, here is a list of the top ten best silver coins for investment. 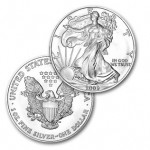 The Silver Eagle is the only silver bullion coin the world with its weight, content, and purity guaranteed by the U.S. government. This alone makes the coins preferable to privately minted “rounds,” and is clearly worth the minimal premium associated with Silver Eagles. New, uncirculated Eagles typically sell for between $1.80 and $2.50 over the spot price of silver, while “used” Eagles may trade for as little as $1 above spot.

What makes the Silver Eagle so unique is that it is instantly recognizable. In a future barter situation, Eagles will almost definitely receive a premium over the coins issued by foreign governments and rounds struck by private minters. The coins’ limited quantity also grants them some numismatic value that tends to appreciate with age. For instance, 1986 Silver Eagles currently fetch a $7-above-spot premium and even Eagles from as late as 2001 can trade for as much as $5 or $6 over spot. Get Silver Eagles for less at Money Metals Exchange, one of the top bullion dealers online. 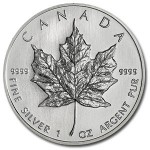 Much like the Silver American Eagle, the Silver Canadian Maple Leaf is a government-issued, legal-tender coin. Although it lacks the caché of the Eagle in the U.S. or abroad (anywhere but Canada, of course), the Silver Maple Leaf remains one of the world’s most recognizable silver coins, and is also one of the most aesthetically appealing. Maple Leafs are magnificently designed, and a genuine, beautiful sight to behold. They’re also the purest of government-issued silver coins, at .9999 fine silver (most others are just .999). 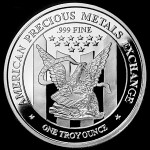 While Silver Eagles command a premium due to their easy recognition, and Maple Leafs are valued for their stunning beauty and low mintage quantities, when it comes to getting the most silver for your buck, APMEX Fine Silver Rounds are your best bet—at least in terms of “coin” form. Technically, non-legal tender issues by private minters are not considered “coins” at all and must be referred to as “rounds” for legal purposes. But silver is still silver, no matter if it’s issued by the U.S. government or a for-profit corporation like APMEX, and the latter’s “rounds” are among the most widely recognized and accepted of private issues.

APMEX rounds are .999 fine silver and sell for $0.79 over spot at APMEX. APMEX stands for American Precious Metals Exchange, and the firm also sells Eagles, Maple Leafs, and other government and private silver coins and rounds, as well as gold, palladium, and platinum. APMEX rounds aren’t as visually striking as the higher premium government issues, but at some level, silver is silver, and APMEX rounds are easy to store and trade without costing much over spot beyond the coinage costs. 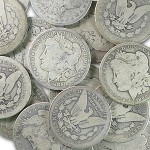 Morgan Silver Dollars are U.S. government, legal-tender coins that were minted from 1878 to 1904, and then again for one year in 1921. They’re 0.86-ounce coins made up of 90% silver and 10% copper, giving them a silver weight of 0.77344 troy ounces—almost exactly the silver content of the original Spanish dollars on which the U.S. currency was initially based.

Although many Morgan Silver Dollars have enormous numismatic premiums, lower-quality coins from years in which many were minted can be purchased at just a little over the spot price of silver. Normally, coins of .999 silver purity are preferable to those mixed with other metals, but the Morgan Silver Dollar is so highly recognizable; it is a rare exception to this rule. 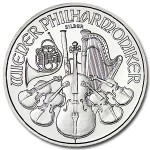 The Austrian Silver Philharmonic is a rare coin that even outdoes the Canadian Silver Maple Leaf in terms of beauty. It is also the only silver coin that is denominated in euros, with a legal tender value of €1.5. One side of this coin features selected instruments from Austrian Philharmonic Orchestra—a national treasure of Austria—while the other side depicts the Golden Hall in Vienna, which is the site of the orchestra’s annual New Year’s Day concert. Fans of Austrian economics also seem to have a soft spot for these coins. 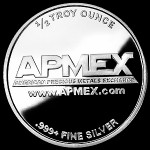 Although one-ounce has become the standard weight of silver coins and rounds, there are advantages to ½-ounce issues. For one, they are more liquid. If using silver in the course of barter, what do you do when you need to make change? You can’t cut a one-ounce coin in half, and if you go to the trouble of melting it down and recasting it, there’s a lot of effort and expense involved. For this reason, two ½-ounce silver rounds are always more valuable than one full ounce silver round—all other things being equal. This is a hard concept for a lot of silver investors and traders to grasp since we’re so used to using “token” currency.

There is a disadvantage to ½-ounce and lighter issues, though: they fetch a higher premium. Half-ounce issues from APMEX sell for more than $2 over spot—or $4 over the per-ounce spot price. Still, if you’re going to have diverse silver holdings and you believe in the possibility of future-barter scenarios, then you’d be well advised to have some half-ouncers on hand. Half-ounce silver rounds also make a great gift and can be used at restaurants as tips to help spread the silver bug. 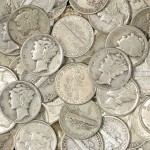 From 1837 to 1964, United States ten-cent pieces were made of 90% silver and 10% copper—just like the Morgan Silver Dollar. Dimes, of course, were smaller, and thus contained less silver; roughly 0.0715 troy ounces.

Although many of these older dimes have become numismatic collectibles, so-called “junk” silver dimes can be purchased at a mark-up of as little as $0.20 per coin. On a per-ounce basis, this is a little steep at about $2.79 above spot, but given the increased liquidity of the smaller coins, this premium may be justified.

Similar to junk-silver dimes, United States quarter-dollar pieces were also made of 90% silver and 10% copper from 1932 to 1964, and were exactly 2.5 times as heavy as silver dimes. 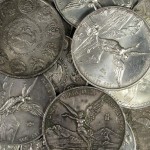 It’s not just the U.S. and Canada that issue one-ounce silver-bullion coins; our neighbors to the south do as well. Mexican Silver Libertads are beautiful coins, but they command a pricier premium upwards of $2, and are somewhat less marketable than the issues of “trustier” governments like the U.S. and Canada.

To reiterate, the smaller the coin, the more liquid—within reason. Also to ¼ oz and 1/10 oz rounds, Monarch also produces 1-gram rounds, and with coins that tiny, the cost of production outdoes the value of the metal by several times. One-tenth ounce, however, is a great weight for trade, and yes, ten 1/10-ounce coins are always going to be worth more than one one-ounce coin, all other things being equal. This can be verified by a quick eBay search, and it makes sense, too: As stated earlier, going to the trouble of breaking down existing coins into smaller increments would be costly, and these coins have already been broken down. They cost quite a bit more—about double the price of their silver content at current rates—so they should definitely not be your only coins, but they are a welcome addition to any diversified silver portfolio.