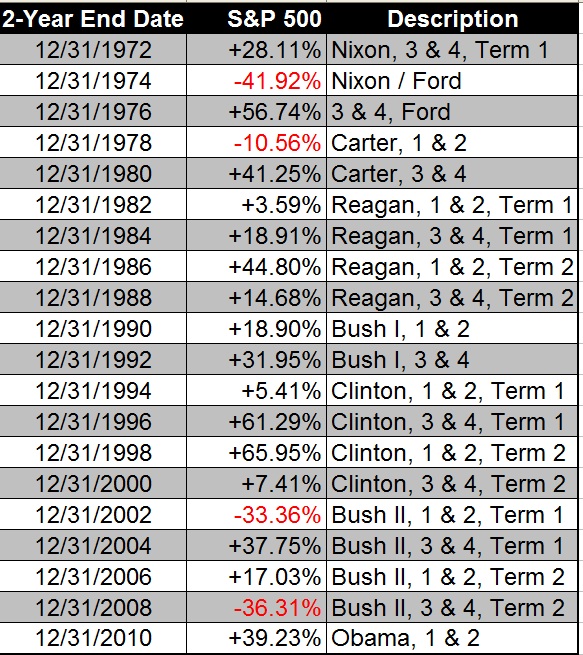 In investment terms, the presidential cycle refers to the fact that stocks have historically performed better in years 3 and 4 of a president’s term than they have in years 1 and 2. Historically speaking, this is fact, even if some analysts want to call it nonsense. Looking back to 1948, Investopedia finds that stocks have averaged 8.8% gains in years 1 and 2 of a president’s term, and 16.1% gains in years 3 and 4 – that’s a difference of more than 80%! Calling this “nonsense” is, itself, nonsense. 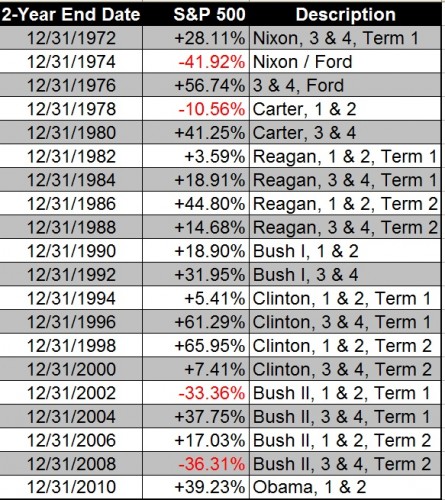 But Investopedia’s analysis is flawed in a few ways. The idea behind the presidential cycle is that president’s try to “juice” the economy during years 3 and 4 of their terms in order to ensure their reelection. Then, in years 1 & 2 of the next term – whether the president was reelected or not – there is a “hangover effect.” Students of Austrian economics and the business cycle will understand this well. But what about cases where a president is not seeking reelection? He will not have the same incentives, and thus, these results should be tossed out.

Investopedia’s study goes back to 1948. Harry Truman was elected to the presidency that year to his only full term – prior to that, he had been finishing the unprecedented fourth term of Franklin D. Roosevelt, who died in office. Truman didn’t seek reelection in 1952, so he didn’t have an incentive to juice the economy. Eisenhower was in office for eight years, and when he bowed out in 1960, his vice president Richard Nixon sought the office. But from there, presidential succession turned into a bit of a mess, with assassinations, presidents not seeking a second term, resignations, etc. Thus, there isn’t much useful data from the 1950s and 60s.

What’s more, something of huge importance happened in 1971 which forever changed the way investments were analyzed: the U.S. severed the tie between gold and the dollar. Therefore, I think this is the proper point at which to begin the analysis.

The Presidential Cycle Since 1971

But a deeper look at the results finds that there’s even more to the presidential cycle theory than first meets the eye. Let’s go through each two-year block on a case-by-case basis:

The years 1971 and ’72 saw stock prices rise by 28.1%. These were the third and fourth years of President Nixon’s first term, and he was seeking reelection. This is also the period during which the dollar’s last remaining ties to gold were severed. Following Nixon’s reelection, he resigned to avoid impeachment and removal from office, in what would have been years 1 and 2 of his second term. On August 9, 1974, Vice President Gerald Ford ascended to the presidency, and during this two-year period of 1973 and ’74, with both Nixon and Ford as president, stocks fell by nearly 42%!

So far, the presidential cycle theory is looking good. Here, it is showing that, following the ultimate short-term juicing of the economy – severing the dollar’s tie to gold in order to allow unlimited inflation by the Federal Reserve – stocks predictably posted gains. But in the aftermath of the fiat-money frenzy, there was a big hangover.

The years 1975 and ’76 saw Gerald Ford hold the presidency in what should have been years 3 and 4 of Nixon’s term. Since Ford had not already served two full terms, he was up for election again in 1976. Thus, Ford had all the same incentives that Nixon had during the final two years of his first term, and Ford also juiced the economy. Stocks were up 56.7% in 1975 and ’76!

This wasn’t enough to win Ford the presidency, though, as he was defeated by a peanut farmer from Georgia. Jimmy Carter gets a bad rap for his “do-nothing” presidency, but the less presidents do, the better. In years 1 and 2 of his term, stocks were down 10.6%, in keeping with the presidential cycle theory. In years 3 and 4, stocks were up 41.3%, despite or maybe because of some very tough medicine from Paul Volcker and the Federal Reserve. This actually paved the way to get the economy back on track for the Reagan era.

Nevertheless, there was a hangover effect for Reagan’s first two years as president. Although stocks didn’t lose ground, they gained significantly less: just 3.59%. Then, in years 3 and 4 of Reagan’s first term, stocks predictably posted bigger gains: 18.9%!

In years 1 and 2 of Bush I’s presidency, stocks were up 18.9%. In years 3 and 4, as he was fighting to be reelected, stocks were up almost 32%. Here, the presidential cycle returns to form.

Bush I wasn’t reelected, of course. Instead, Bill Clinton assumed the office of president, and he had to deal with a Bush-Greenspan hangover his first two years. During that time, stocks were up just 5.4% – the worst two-year period for stocks since 1981-82. However, after being thwarted in his attempts to bring more socialism to America, the opportunist Clinton decided to “play ball” with the D.C. establishment and “triangulate” his way to a second term. Clinton made nice with Alan Greenspan, reappointing him, and Greenspan helped Clinton deliver big, illusory gains for the stock market in years 3 and 4 of Clinton’s first term, during which time stocks were up 61.3%!

This “irrational exuberance” continued into years 1 and 2 of Clinton’s second term, with stocks up almost 67% during that time. But keep in mind that Clinton was also facing impeachment, and he knew it was “the economy, stupid” that could prevent that. Looking back at Nixon’s travails, “Slick Willy” knew he needed to juice the economy to avoid being the first president ever forcibly removed from office (without the aid of an assassin’s bullet, that is). So this explains, in part, why stocks did so well when, according to the presidential cycle, they shouldn’t have.

Years 3 and 4 of Clinton’s second term saw stocks up by just 7.4%. Clinton wasn’t fighting for reelection, and even if he were, he’d already shot his wad (no pun intended). Al Gore, his VP, was seeking the presidency, but Clinton and Gore were not on the best of terms, and, undoubtedly, Clinton’s inability or unwillingness to juice the economy during this two-year period helped pave the way for George W. Bush.

During the first two years of Bush II’s presidency, stocks had their worst two-year performance since 1973-74 – but was this Bush’s fault? I’m no Bush apologist, but clearly, it was not. Clinton and Greenspan had put pumped the economy full of so much easy money that there had to be a big hangover, and the modest 1999-2000 swoon wasn’t nearly enough. Instead, stocks had to come crashing down, and they did: by 33.4%.

But Greenspan, the old Reagan appointee, was still at the head of the Fed, and he was a Republican at heart, despite his closeness with Bill Clinton. He helped ensure Bush’s reelection in ’04 by flooding the market with even more easy money and causing stocks to post 37.75% gains in 03-04.

Once again, the hangover came, as stocks were up just 17% in 05-06. Then, in 07-08, with Bush not facing reelection, the hangover intensified, with stocks losing 36.3%. This is a years 3 and 4 period, and thus, it goes against the presidential cycle theory – but with good reason. Bush wasn’t facing reelection, his VP wasn’t even on the ballot – instead, his sworn enemy John McCain was the nominee of his party.

The first two years of the Obama presidency saw stocks post 39% gains. Is he going to do what he can to juice the economy and produce even bigger gains in 2012? History says he should, but given the inability of the Republican party to nominate a meaningful challenger, the incentives aren’t really there.

The presidential cycle is fact. Indeed, a deeper look at the numbers shows that the exceptions, by and large, prove the rule. But past performance does not necessarily indicate future results, and with a President Obama reelection a near certainty, it wouldn’t be that surprising to see stocks fare poorly in 2012. There’s also the issue that the president and the Fed head may be losing control of our runaway inflationary economy. Rather than betting on the presidential cycle, gold is a safer bet – and silver is even better.