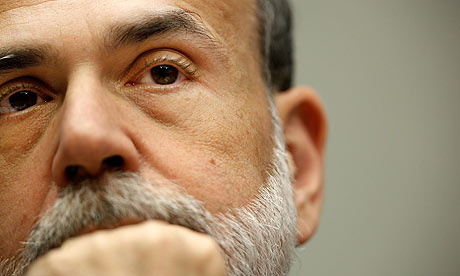 According to Federal Reserve Chairman Ben Bernanke, the U.S.’s “economic recovery” is “close to faltering,” and, as a result, the Fed is preparing to make further interventions into the market to stop this from happening.

Obviously, any student of free-market economics can pick out two major problems with the above sentence:

1. The U.S. has not experienced an “economic recovery,” and thus, it cannot be argued that this nonexistent recovery is “close to faltering.” One could quote myriad statistics supporting the assertion that there has been no recovery, but why bother? Those of us living in the real world, outside the Beltway and away from the neatly segregated communities of the politically connected ultra-rich, know this from experience.

2. The Federal Reserve and its interventions were the primary cause of the recession we still haven’t recovered from, and indeed, of all recessions the U.S. has experienced since 1913, which is the year the Federal Reserve came into being. Thus, Bernanke’s “assurance” that the Fed stands “prepared” to intervene is actually more of a threat.

Before The Federal Reserve

The Federal Reserve is a central bank with the license to create money out of thin air. Initially, U.S. dollars were backed by precious metals – gold and silver – and for every dollar printed, there needed to be corresponding gold or silver backing it. Gold and silver were not arbitrary choices to back our money – in fact, it was the reverse: Paper dollars were created as a proxy for the real money which was the gold or silver.

In the days before the Federal Reserve, banks were relatively unregulated, especially at the federal level. If someone wanted to start his own bank, he could, provided he was able to meet the requirements set by his native state. Once in business, a free-market banker could print his own paper money to back the gold and silver he had on hand in his vaults. Legally, he was not allowed to print more paper receipts than he had gold and silver – but greedy bankers did this time and time again.

If Bank A started issuing loans in paper money for which they had no gold backing, while Bank B did not; then Bank A would be able to offer lower interest rates than Bank B; thus stealing business from its competitor. Bank B could either “get with the program” and do what Bank A was doing, or likely go out of business. If Bank B wanted to offer even lower interest rates, it could simply do even more counterfeiting than Bank A, which would in turn inspire Bank A to create even more money for which it had no backing, etc. This is what banks throughout the country would do, until ultimately, things would get so out-of-hand that their schemes would be exposed by a “run on the bank,” where holders of the bank’s paper dollars rushed to redeem them for the real money – the gold or silver – and the banks were unable to fulfill all of their paper promises.

Now, when this happened, what should the government have done? Obviously, those guilty of counterfeiting – that is, creating money for which there is no backing – should have been held accountable. In many societies, counterfeiters have faced the ultimate punishment of execution! Even if this can be considered a bit extreme, certainly the banks should have been forced out of business and the people responsible for the counterfeiting should have been made to pay restitution to their victims, right?

Well then, as now, the rich and powerful controlled the government, and thus not only were the bankers not executed or jailed, they were typically given special dispensations called “bank holidays,” during which they were not required to redeem their notes for precious metals. The government would give them time to get their accounts in order, and then the banks would be allowed to resume business as usual, normally with another round of funny-money creation just a few years later.

The Purpose of the Fed

You see, laws against counterfeiting – again, creating money for which there was no backing – were already on the books. What the Federal Reserve Act did was standardize the amount of counterfeiting to prevent the competition between banks wherein each would seek to out-counterfeit the other. This limited the counterfeiting to reasonable levels, and also established links between the member banks so they could aid one another during bank runs. The central bank itself, The Federal Reserve, was the “lender of last resort,” ready to swoop in and bail out any bank that got into too much trouble.

Now, so long as a gold standard was still in place, and our paper dollars were still backed by gold, there was a limit to how much counterfeiting any bank could do — even the Fed itself had limits. But after August 15, 1971, when the last vestiges of gold backing were stripped from the U.S. dollar, there have been literally no limits. Our money is backed by nothing, and it can be created at will by unelected, unaccountable bureaucrats in Washington, D.C.

The Mechanics of Inflation

The Federal Reserve does not technically “print” money, but it does create it. The issue of “printing” is even less important now, since the vast majority of money is never printed at all, but exists in electronic form only.

And where does the Fed get this money to buy these bonds in the first place? It creates it. What is the money it creates backed by? If you said “nothing,” you’d be right – but the Fed would disagree. It would say the money is backed by the U.S. government’s promise to repay – the bond. This is a neat little trick, isn’t it? The Fed now can buy anything it wants, create the money out of thin air, and then say that the newly created money is backed by what was bought with it! That would be like you and I buying a house, paying with a bad check, and saying that the check is actually backed by the value of the house that we bought with it.

The Real Politics of Redistribution

When the Fed creates new money, who gets it? Well, the primary beneficiaries are the government itself. After all, the Fed spends most of its newly created money buying government bonds.

So the government gets an influx of cash – but what does it do with it? It pays its contractors, supports the military-industrial complex, doles out corporate welfare, etc. So these businesses and their owners, executives, and even low-level employees are the secondary beneficiaries of the newly created money. Agorist economic theory calls these people “the political class.” It could also possibly include the poor beneficiaries of government programs – really, anyone dependent upon the government for their livelihood.

The political class then spends its money within the economy, and ultimately, it “trickles down” to the rest of us – those of us who are not dependent upon the government, and instead earn our money through the voluntary exchange of our labor or talents (or the past exchange of those things). But by the time the money circulates down to us, it has lost much of its purchasing power.

To understand this, just imagine that the total sum of wealth in the world was $10 trillion. If, overnight, everyone’s total holdings doubled, so that there was now $20 trillion in value, you’d expect the prices for everything to double, right? If instead, the total wealth increased from $10 trillion to $11 trillion, then you’d expect a 10% rise in prices, correct? But what if the new wealth was not distributed evenly? What if a certain class of people received the new $1 trillion without the rest of the population understanding what had happened? The rest of us would continue charging the same prices and expecting the same wages, and we’d receive the new money before the 10% price inflation took place. But as the money worked its way into the system, prices would start getting bid up, and those at the bottom of the economic pyramid would get the new money only once prices had already risen.

In this way, the creation of new money is a form of stealth theft: It redistributes purchasing power from the productive class to the political class. It also tricks people into making bad investments, because when money is plentiful, interest rates are low, and one can more easily make a profitable return on one’s investment. When the new money dries up and we have a recession, then the investments made during the inflationary period may not be profitable anymore, which compounds problems.

This is what has happened time and time again since the creation of the Federal Reserve, with things getting progressively worse over time. And with Chairman Bernanke’s promise/threat to “do something” about the “faltering recovery,” one can only expect things to get even worse.

Readers of Silver Monthly know the solution: buy gold and silver. Precious metals are real money that stand the test of time. They cannot be controlled by governments. They were created by God or nature, and have been recognized as stores of wealth and commodities of exchange since the beginning of civilization. They are timeless, and time will tell that the U.S. dollar is not.