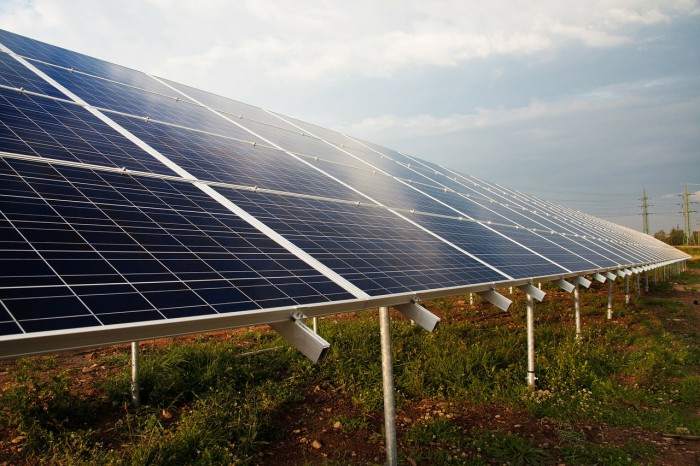 The massive drop in the price of oil to less than $50 a barrel has put a hurting on solar-energy companies. Shares of First Solar Inc. (Ticker: FSLR) were trading at $73 in September, but have since fallen to $40. This decline of nearly 45% is even steeper than the 22% losses endured by the S&P 500 Energy Select Sector ETF (Ticker: XLE) over the same period.

But despite the woes of publicly traded solar stocks, investment in solar energy accelerated in 2014. Bloomberg Energy Finance reported new funding for a wide range of alternatives, including “low-carbon energy technologies,” grew 16% to $310 billion last year. For solar in particular, Mercon Capital Group reported $1.3 billion in 2014 venture-capital funding, up from $612 million in 2013.

With oil’s precipitous slide putting downward pressure on solar shares, how do these investment trends make any sense? Whenever markets seem to be illogical, the first question that you should ask is: “What role is the government playing?” The answer will almost always explain the abnormality, and this case is no exception: Governments around the world are subsidizing solar investment.

According to Investor’s Business Daily, homeowners can contract with solar-leasing firms that will install solar panels “for free.” There is no such thing as a free lunch, though, as IBD note that installations are only made possible by a “cascade of government subsidies” for which taxpayers foot the bill.

Absent government subsidies, oil’s plummet would cool demand for solar energy. Governments initiated the subsidies when prices for oil were much higher than they are now, but they’re unlikely to cut back the subsidies even with oil below $50 a barrel.

Since governments externalize the costs of their programs by foisting them on the taxpayers, they’re inherently slower to respond to changing market dynamics than profit-motivated firms. Furthermore, every subsidy creates a voting constituency that lobbies for its maintenance and increase.

A decade ago, solar energy commanded 0% of the silver market. Initial projections for 2015 estimate the industry’s consumption of silver will roughly double to 100 million ounces, or about 10% of the world’s annual supply.

What’s this have to do with silver? Well, silver is a primary ingredient in photovoltaic cells, with between 85% and 90% of solar panels using silver in their construction. Each solar panel consumes roughly two-thirds of an ounce of silver, and the solar industry used more than 50 million ounces of silver last year – about 5% of the world’s annual supply.

Silver investors are typically advocates of the free-market economy and opponents of “crony capitalism.” We would certainly prefer to not ride a government-subsidy trend, but if governments are going to tax us to subsidize solar, there’s not much we can do about it. The fact that it provides a price floor for silver is a good thing, particularly given what many consider widespread manipulation intended to keep the price of silver down.

The commodity markets distinguish between precious and industrial metals, but silver rightly falls into both categories. This makes silver more volatile than gold, but it also ensures a certain level of stability. After all, industrial metals are hot during bullish economies, while precious metals are a safe-haven during downturns.

Silver is the most electrically and thermally conductive metal known to man, and this property is what makes it useful in solar panels. Silver is used to make a paste for crystalline silicon panels, which account for 85% of the market, according to Forbes. Silver is also used to make semiconductors and batteries, and it has nanotechnology applications, as well.

With oil in a tizzy of a bear market, U.S. gas prices are at levels most people never thought they’d see again. But “pleasure at the pump” is a predominantly American phenomenon. In most other industrialized countries, gasoline is so heavily taxed that the benefits of cheap oil aren’t as directly felt by consumers. Another implication of this global disparity is that solar has lost less of its attractiveness to the average European consumer.

China’s government is also promoting solar-panel installations. The nation is making an effort to reduce its reliance on coal and has set an ambitious target of 70 gigawatts of solar-power generation capacity by 2017. This would be a nearly four-fold increase from the country’s capacity as of 2013, which stood at just 18.6 gigawatts.

The Federal Reserve’s $1.8 trillion in monetary expansion (“quantitative easing”) since 2008 was widely expected to result in price inflation. Instead, financial assets ranging from stocks to bonds to oil futures were inflated, while consumer prices have been relatively stable.

Whatever price inflation has occurred wouldn’t have without the Fed’s monetary inflation, since the market economy’s productivity gains naturally put downward pressure on prices. By this same token, productivity gains can absorb monetary inflation, thereby keeping price inflation low even as the monetary base expands. This is what many forecasters, myself included, failed to appreciate at the onset of the Fed’s “QE.”

Gold and silver made huge gains in the first decade of the 21st century, and most hard-money forecasters expected those gains to continue and accelerate as the Fed’s policies weakened the dollar. Since gold and silver are priced in dollars, a weak dollar is bullish for gold and silver, while a strong dollar is bearish for precious metals.

After years of coordinated policy, central banks are diverging. The European Central Bank and Bank of Japan are cutting interest rates to stimulate their moribund economies, while the Federal Reserve is expected to raise interest rates later this year. This divergence is leading to a stronger dollar, and thus weaker investment demand for precious metals. Weak global economic outlook is hampering demand for industrial metals to an even greater degree.

Despite trends going against both industrial and precious metals, silver’s role as a component in solar panels promise to provide price support for long-term silver investors. With the dollar looking to get stronger, this could be a good time for silver bugs to accumulate more.