Harmony Gold Mining Company is a South African gold miner. It ends its fiscal year on June 30, and for fiscal 2011, Harmony produced roughly 1.3 million ounces of gold. At the end of the fiscal year, Harmony’s gold reserves totaled nearly 42 million ounces. The company owns a stake in the Morobe joint venture with Newcrest Mining, which focuses on exploration and development of gold resources in Papua New Guinea. Most of Harmony’s exposure is in South Africa, though. In fiscal 2011, Harmony Gold Mining reported net income of $86 million on sales of $1.78 billion. Shares of Harmony Gold Mining trade on the New York Stock Exchange under the ticker symbol HMY. Harmony has a market cap of $4.19 billion.

This is the second in a series of articles analyzing the current status of gold stocks. Earlier this year, Silver Monthly analyzed several silver stocks, and we reviewed some common investment concepts in our first analysis of Silver Wheaton. To brush up on some terminology, go to that article. Otherwise, continue reading.

Graham Briggs (pictured) is Harmony’s CEO. He’s also a member of the firm’s board of directors. Briggs is a geologist by profession and was previously the managing director of Harmony Australia. Briggs joined Harmony in 1995 as a business manager. In 2011, Briggs received total compensation of around $1.5 million, which is in line with industry averages.

Patrice Motsepe is the chairman of Harmony’s board of directors. Motsepe is not an independent director, but Harmony has established a “lead independent director,” which is seen as good for investors. One board policy that is not-so investor-friendly, though, is Harmony Gold’s program of voluntary affirmative action. The firm takes race and gender into account when appointing members to its board of directors, rather than choosing the most qualified candidate. This is not in investors’ best interest, regardless of their race or gender.

Harmony Gold’s fiscal year will end on Saturday, but it won’t post Q-4 and annual results until August 14. Last quarter, Harmony beat earnings expectations by 4%, growing EPS at an annual pace of 73%, and bringing its three-quarter average for EPS growth to 83%. Estimates for the current quarter were revised lower, but they’re still expected to be up by a whopping 475%! Sales, however, were only up 3% last quarter, compared to a 15% three-year average for sales growth.

Harmony’s balance sheet is not the strongest, and it has a pretax profit margin of just 4.9%. In all, its financials are less than encouraging, despite the promise of year-over-year EPS growth for the current quarter.

As of Monday’s close, Harmony’s $9.72 share price is just under its 50-day Moving Average line, which should serve as resistance. It would be wise to wait for Harmony to break through this barrier before entering the stock. I could definitely see Harmony being pushed below its bottom Bollinger, too, which would be bearish; and it saw its fast moving average fall below its MACD indicator line on Thursday, June 21, which is another bearish sign. Harmony’s MFI looks mildly bearish, while its Williams %R looks mildly bullish – these two indicators are thus a wash. 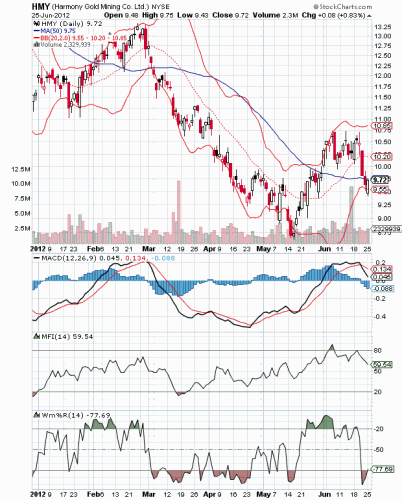 Although gold companies tend to be countercyclical and a good hedge against inflation risk, gold stocks are not as good for these purposes as physical gold is. What’s more, the stock market has been in bearish mode for a while, even as gold has fallen. Inflation? People are too worried about the euro to notice what’s going on with the U.S. dollar as it relates to anything other than the failing European currency, at least in the short term. And as far as the short term goes, Harmony’s technicals look terrible.

Harmony’s per-ounce mining costs are much higher than the industry average, and thus, with gold prices down, so is Harmony’s profitability. Most of Harmony’s political exposure is in South Africa, where miners unionized. In summation, there are much better plays on gold than Harmony, even if you want to buy a gold stock instead of physical gold. Gold ETFs, for example, allow you to avoid company-specific risk – of which Harmony has a lot.