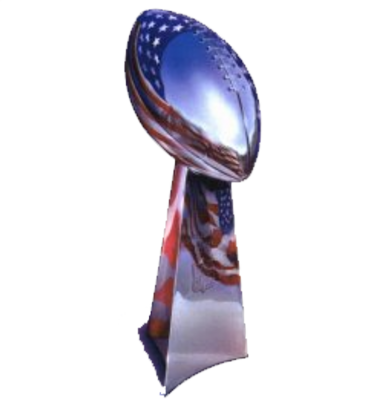 It’s Friday, and for most working people, this alone is cause for celebration. But for millions of Americans – especially American men – the promise of this weekend is a little bittersweet. That’s because it will be the first weekend without football in five months.

Last week’s Super Bowl saw the New York Giants upset the New England Patriots for the second time in four years. It was a day of joyous celebration for Giants fans; biting disappointment for Patriots backers. The joy and pain were felt not only by the teams’ hometown fans, but by the millions who placed wagers on the big game, too. An estimated $10 billion was bet on this year’s Super Bowl, which means that a little over $5 billion was lost. Half of all adults in America placed bets on the Super Bowl, which means that, on average, each bettor wagered $85.

What if, instead, those people invested in silver?

Let’s say you bet $85 on the Super Bowl this year and won. Let’s say you did the same thing last year – and the year before that… and the year before that, etc., dating all the way back to Super Bowl I between the Green Bay Packers and Kansas City Chiefs. Of course, $85 was a lot of money back in 1967 – the government’s Bureau of Labor Statistics says that $85 in 1967 had the same purchasing power as $572.45 in 2011! So let’s say you bet the inflation-adjusted equivalent of $85 on every Super Bowl ever, and won every time. Here would be your total winnings: 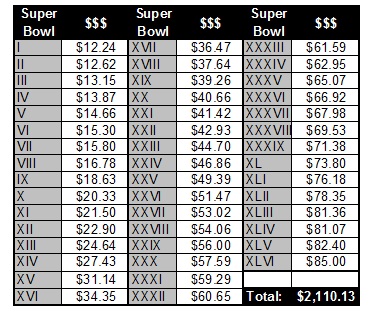 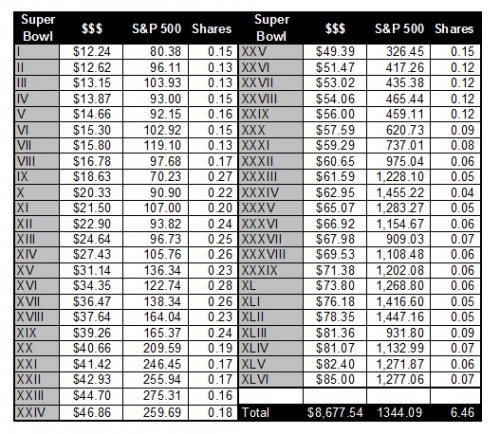 Now, what if instead of betting the game or buying stocks, you bought silver? 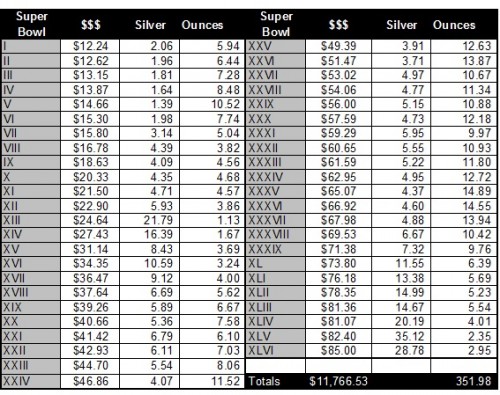 The above chart shows the amount invested in the left column, the yearly average price for silver in the center column, and the number of ounces of silver purchased, based on that average, in the right column. After forty-six Super Bowls, you’d be left with 352 ounces of silver worth $11,766.53 today. That’s a profit of $9,656.20, or 457%!

Now the question: Is it easier to pick the winner of the Super Bowl forty-six consecutive times, or to buy silver once a year? You might say that betting on the Super Bowl is fun, and maybe it is. But it’s not as fun as getting rich off silver.

Millions of people around the world love NFL football. Others are partial to golf, soccer, baseball, tennis – you name it. A lot of time and money is spent pursuing these spectator hobbies, and everyone should have something they enjoy just for the sake of enjoying it. However, if you’re one of these people that devotes nearly half of each year to religiously following the NFL, the end of the season gives you the opportunity to redirect your focus towards your investments. By the time the 2012 season kicks off in September, perhaps you’ll be a wealthier and wiser fan.