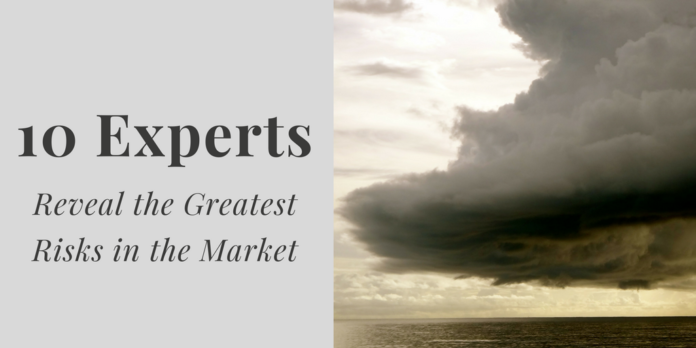 “I think the biggest risk in all markets right now is over-valuation. Real estate, stocks, and bonds are seriously over-valued, especially in the US. Investors who buy these asset classes at the top of the market risk the kinds of losses we experienced in 2007-2009”
– Mark Nestmann at The Nestmann Group

A lot of the experts listed below highlighted an overvalued stock market, bond market, real estate market and a few other risks related. At this point, nothing looks like an overvalued, ready to blow up risk. The most contrarian thing to do right now might be cash. Add on considerations like margin debt from individual investors, it all starts to add up to a very dark future.

To top off all those overvalued assets comes two political risks: 1) tensions flaring between North Korea and the US. Any break out of war would send shivers into the markets, 2) US shutdown as budget items like Trumps wall are hitting both sides of DC. To sum up the greatest risks across the markets, Bill Holter steps in to say:

“in one word …EVERYTHING!”
Bill Holter, Jim Sinclair

“From a global macro perspective, there is no shortage of grey swans. Rising geopolitical tensions, especially in the Middle East, Korean Peninsula, and South China Seas, have increased the risk of a global conflict. The rise of populism and nationalist agendas across the globe, at least partially enabled by the huge monetary expansion post-GFC which exacerbated inequality by favoring wealth (ie higher asset prices) over income (ie stagnant wage growth and generally high unemployment), adds an element of greater policy uncertainty.

QE in advanced market economies has been a salient feature of the global financial landscape, but since 2008 nowhere has credit and leverage growth been as significant as in China. Private-sector loans to the non-financial sector increased from $5.34 trn (114.2% of GDP) in Q4 2008 to nearly $22.8 trn (209.5% of GDP) in Q3 2016. That is nearly the current size of US GDP and more than the balance sheets of the Fed, ECB, BoJ, BoE, and SNB combined. Wealth Management Products (WMPs), an instrument with serious asset-liability mismatches, alone account for some $4 trn.

Chinese authorities are implementing new regulations favoring deleveraging, but deflating bubbles is hardly an easy task. Potentially the biggest risk for markets right now is a Minsky moment in China and the related spillover effects, not least if WMPs become financial WMDs.”

“There the biggest risk in financial markets is that 3-4 major risks are steadily converging to produced what could be a major market’s “Perfect Storm”, as explained by Stewart Thomson, Graceland Updates:

“The biggest risk is an implosion in sub prime auto and student debt coupled with a Fed with an already bloated balance sheet. Used car prices are tanking at auction and lease returns are saturating the market. I believe subprime auto and student loan losses could trigger a violent reaction in debt markets which could be the “first domino to fall.”
Bernank creator of Comparesilverprices.com

Liberty Street Economics blog explains, “The data suggest some notable deterioration in the performance of subprime auto loans. This translates into a large number of households, with roughly six million individuals at least ninety days late on their auto loan payments.”

Overvalued by Every Metric

“The trillion dollars of stock bought at record high prices with debt will be vaporized in the next inevitable stock market crash. But the debt will remain.” Jim Quinn, The Burning Platform blog

“The biggest market risk is complacency. The equity markets are so overvalued by any metric and almost all market participants believe the Fed has their back and no matter what happens the Fed would not let the stock market crash. This is the big risk, believing the Fed is all powerful. “
David Morgan, Editor of The Morgan Report
“I think the biggest risk to the markets right now is that the massive rush into price-sensitive investment strategies reverses course. It’s not just the shift towards passive investing. It actually begins with central bank quantitative easing and stock buybacks. It’s also trend-following and volatility targeting/selling strategies. All of these are, in large part, just the same trade and when, not if, the incredible trend towards these price-insensitive strategies reverses volatility will make a major comeback.”
Jesse Felder

“the chart below shows growth in percentage terms of the S&P 500 (blue line) and margin debt (red line), adjusted for inflation, since 1995. Two things become brutally clear: Just how leveraged the stock market has become, and how peaks of leverage are unwound by crashes. But the charts only depict the $528 billion in margin debt reported by the NYSE. Now add the current spike in “shadow margin” of perhaps $250 billion in SBLs. This “shadow margin” might raise current leverage by nearly 50%!” says Wolf Richter.

“Since 2009 over $1 trillion of debt was taken on by S&P 500 companies just to buyback their own stock. The narrative about corporations being flush with cash is complete bullshit. In the last two years, the trend of issuing debt to buyback stock has accelerated to an all-time high of 30%.” and continued “If all is well and the market is headed higher then why are corporate executives buying their own firms’ shares at the slowest pace in at least 29 years. According to the Washington Service, there were a total of 279 insider buyers in January, the lowest since 1988.”
Jim Quinn, The Burning Platform blog

“In my opinion, BY FAR the biggest risk to price in the Comex silver market is the extreme nature of the open interest picture and Commitment of Traders structure. Having total silver OI and Commercial (Bank) net short positions at all-time highs does not portend well for the short term direction of price…if you want it to go up.”
Craig, TFMetals Report
© 2006-2016 Silver Monthly