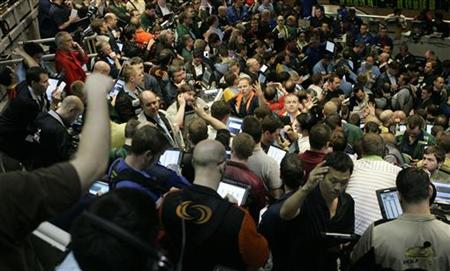 Silver dipped below $30 today for the first time since January 16. What’s causing silver to decline in price? Forbes columnist Panos Mourdoukoutas says we’re framing the question wrong. He says the reasons that people were bullish on silver in the first place have been proven false, and that the metal is about to experience a deep correction. Is Mr. Mourdoukoutas right? Or is it he that is need of a correction?

Mourdoukoutas says silver became the choice of the “momentum crowd” for three reasons:

Mourdoukoutas says each of these beliefs has turned out to be untrue. Unfortunately for Mourdoukoutas, and for anyone who would like to see the price of silver collapse so they could accumulate more, Mourdoukoutas is dead wrong.

Mourdoukoutas says the Fed is not likely to provide another round of stimulus – “QE3,” or a third dose of the euphemistically named “Quantitative Easing.” But the Fed is showing no signs of tightening the monetary reins. What’s more, with Republican challenger Mitt Romney saying he plans to replace Fed Chairman Ben Bernanke with a new appointee, Bernanke has every incentive in the world to print money and stimulate the economy to help ensure President Obama’s re-election — this concept was explored in my earlier article on The Presidential Cycle.

Bottom line: The Fed is still accommodating plenty, and is likely to become even more accommodating as the election season goes on.

Chinese growth is decelerating – this cannot be contested. But growth is still growth, even if the growth itself is growing at a slower pace, and this means more and more Chinese are joining that nation’s emerging middle class. The Chinese people are hard workers and savers – not big spenders like their American counterparts. And the Chinese government knows it cannot continue trading their people’s manufactured goods for paper promises from America. Chinese demand for gold and silver will remain strong.

Panos Mourdoukoutas is short the SLV exchange traded fund, which is a proxy for silver; and long the ZSL fund, which is a bearish bet on silver. One could charge him with the spreading of anti-silver propaganda for the benefit his own financial position. He cherry-picked three bullish factors for silver that he thought he could refute, but failed – and he didn’t mention things like the concentrated short position in silver, or the coming silver shortages.

Nevertheless, I can’t help but hope Mourdoukoutas is right for the short term. I know he’s wrong, long term. But a dip below $20 in silver? That would be like Christmas to silver bugs still in the accumulation phase. So to Mr. Mourdoukoutas, I say “thank you.” If your Forbes article helps faint-of-heart silver holders sell and pushes down the price of the metal, it will only help me buy more for less.